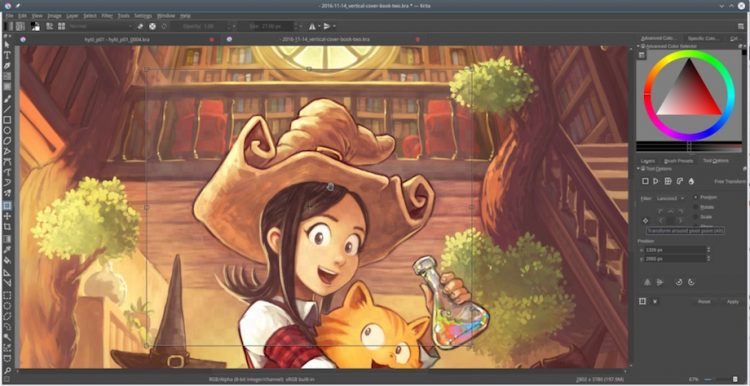 Krita, one of the most popular open-source graphics editors available, has a new release — and it’s already available to install on Ubuntu.

The Qt-based raster graphics editor is popular with illustrators and digital artists, and has seen a wealth of development and progress thanks to a string of successful Kickstarter campaigns, including a recent one aiming to ‘make text and vector art awesome‘.

Krita 3.1.3 is more modest release composed primarily of a bug fixes. Krita developers say their aim for this release was to make the app “as good and solid as we could”.

That doesn’t mean there aren’t any new features to enjoy. You can now scale around a pivot point; there are context menu actions for default tool (cut, copy, paste, object ordering) and, should you need it, an option to allow multiple instances of Krita.

Krita 3.1.3 is available to download for Windows, macOS and Linux. The Krita download page has all the relevant links.

Linux users on a modern Linux distro can download and run the app via an .appimage:

The Krita Lime PPA provides the ‘freshest builds’ for users on Ubuntu 16.10 & 17.04 users —  yup, no packages for 16.04 LTS. Keep in mind that as this is a Qt5 application it will also pull in other Qt and KDE dependencies are part of the install.

To add this PPA so your software sources and install or upgrade to the latest Krita release, run these commands in a new Terminal window: