Revealing plans in its latest monthly update, Mint says it will formally drop the MDM Display Manager (MDM) in favour of LightDM with Mint 18.2, release date for which is as-yet unknown.

The popular Ubuntu-based Linux distribution mooted a possible switch earlier this year, noting that it had a key feature MDM lacks (guest sessions), and has become something of a standard across distributions.

LightDM itself is a lightweight and extensible backend with a clean, lean codebase and full standards-compliance for varying login and authentication methods. It is the default display manager used in Ubuntu, and uses the Unity Greeter as the GUI front-end to it.

But Mint have opted not to use the Unity Greeter as their front-end for LightDM, citing  “its close ties with Unity, GNOME, Ubuntu and indicators”.

Instead, they’ve created a fork of it called Slick-Greeter.

For one it’s said to be cross-distribution and “should work pretty much anywhere”.

All of the panel applets you see are embedded in the greeter and are not separate indicators being loaded in the background. To that end Mint say that no settings daemon is launched or loaded with Slick Greeter, which is a fairly impressive feat, and one that should help speed up loading times a little.

The greeter is also HiDPI friendly; supports taking screenshots; and is “graphically configurable” using the lightdm-settings tool the distro created a few months back. 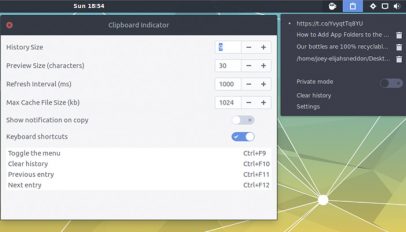 A Simple, Straightforward Clipboard Manager for GNOME
Read Next