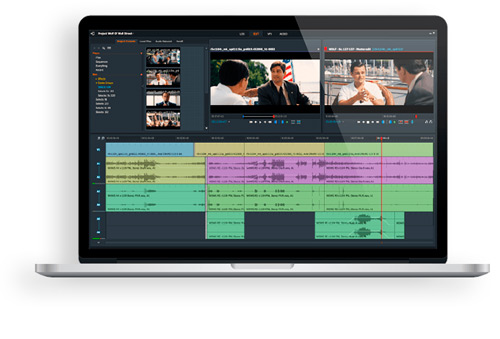 Lightworks is a professional-grade video editor available for download on Windows, macOS and Linux — it has just has received an update.

And boy is it a big one.

Like a sequel to the Expendables, Lightworks 14.0 is packed to the rafters with cameos from features you always knew were there, but had sort of forgotten all about.

And part of the ‘old dog, new tricks‘ vibe is thanks to the top-to-toe redesign the non-linear editor is sporting.

Lightworks’ new look (called “Fixed”, funnily enough) addresses the software’s most oft cited criticism: that it’s hard to use. Thew new layout aims to offer a “more organised” workspace, and help you discover, learn, and use the editor’s various features.

“For over 25 years Lightworks editor has been at the forefront of film editing, having been used on many of the finest films in cinema history: The Wolf of Wall Street, LA Confidential, Pulp Fiction, Heat, Road to Perdition, Hugo, The King’s Speech and many more,” Editshare, the company behind Lightworks, say on its official website.

There are said to be more than 400 changes in this update, including over 70 new features.

The bulk of these features are a little niche for mosts tastes, but add up to an appetising whole.

One minor sounding feature that I appreciate: the ability to right click an empty area of the timeline and ‘close the gap’.

As someone who made videos with voice over I also can’t wait to try out the new and improved Voice Over tool, a feature the editor previously held back for its fee-paying users.

If you happen to use it or have access to it, you can browse, import and buy clips from the Pond5 media repository within Lightworks.

See the Lightworks 14.0 release notes (a PDF, no less) for a rolling list of everything that’s changed.

Editshare say “with the release of Lightworks v14.0 we have created the complete video creative package so everyone can make video that stands out from the crowd. Whether you need to make video for social media, YouTube or for a 4K film project, Lightworks makes it possible!”.

Light works supports Ubuntu 16.10 or later — sorry LTS users. You won’t be able to export to MP4 or MOV; you can’t import WMV; and there’s no FX plugin-support.

Editshare recommend using a modern PC with at least an Intel i7 CPU, 3GB RAM, and two high-resolution displays (1920 x1080) or above. For what it’s worth I ran the previous version of the app on my main PC, an Intel i5 iMac (running Linux) with 20GB RAM, and a built-in HD display.

GPU wise the company “strongly recommend NVIDIA […] for anyone wishing to get the most out of Lightworks”, specifically highlighting the NVIDIA K1200, K2200, K4200 and K5200 as cards that show ‘exceptional performance when used with Lightworks on Windows or Linux’.

Lightworks is free to download, though some features may require a license.

And nope, Lightworks is still not open-source.