Five years ago today Ubuntu introduced the HUD, a (for the time) revolutionary new way of interacting with application menus on the desktop.

The HUD (which stands for ‘Heads Up Display’) aims to make finding menu items faster using keywords instead of clicks, the idea being to help speed up our workflows by letting us find and use menu commands faster.

Using this text-based alternative in a pointer-centric UX is seamless: you stroke the HUD shortcut key (Alt) and a handy drop-down search bar appears on screen. This is automatically given focus to allow you to quickly type a keyword. As you type matching menu entries appear. Then, with a quick tap of enter/return, you can open or apply option, setting or feature without ever taking your fingers off of the keyboard.

The really neat bit, as we wrote at the time, is that: “the HUD is capable of remembering what items you use most often and prioritising them in the results”.

Smart, granular control. Who wants to poke through menu after menu trying to find an option they only have the vaguest memory of?

Canonical saw the HUD as “…the future replacement for the traditional application menu” and said it would “be a major area of research and development for us and the community in the coming four releases of Ubuntu.”

Despite the huge hype to accompany its debut, HUD has rarely ever been trumpeted or spotlighted since. Like many innovative features Ubuntu has created over the years, this feature has been left ‘as-is’, receiving little (if any) improvements.

And despite forming a part of the initial Ubuntu Touch designs the HUD was quietly dropped from the actual implementation, there is no indication that the HUD will be part of the Unity 8 desktop shell either.

The “problem” for the HUD is that it’s invisible. To be a memorable feature you have to at least be discoverable, right?

Unlike global menus or locally integrated menus the HUD is ‘invisible’; it isn’t an obvious feature for users, reviewers and bloggers to find. With no dedicated button, or hot corner to trigger it if you don’t know the HUD exists you probably won’t find it by accident, either.

But it also just works™; barring the odd app here and there almost every app, old and new, play nicely with the HUD. What else is there to do to it?

One of our followers replied to our #OTD HUD tweet to suggest we find out if the feature is still in use:

could you please make a poll how many omg readers are using HUD?

We’re only too happy to oblige. So over to you: do you use the Ubuntu HUD? 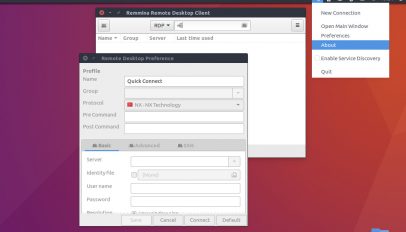 The Easy Way To Install Remmina 1.2 on Ubuntu (Updated)
Read Next