Roll out of Ubuntu OTA-12, the latest update for Ubuntu Phone and Tablet, is now taking place.

The latest update brings a number of changes, improvements and tweaks to the fledgling mobile platform.

The ability to connect to a wireless display from the Bq Aquaris M10 Ubuntu tablet is this release’s big headline change. Canonical demoed the feature last week.

“All the services running from your tablet are now available on the desktop through just a wireless dongle and no cables — giving you the full Ubuntu convergence experience.”

It should be noted that it’s still early days for Aethercast, the technology used to connect ‘wirelessly’ through Miracast capable equipment and many cheap n’ cheerful Miracast dongles are not supported.

OTA 12 users of ‘converged’ devices — i.e., the M10 and PRO 5 — can, Canonical say, “install any Ubuntu conventional desktop app to use on [their] Ubuntu phone or tablet when a mouse and keyboard are connected.”

Don’t get too excited about this just yet. Canonical’s blurb is a slight over simplification of a fairly involved process.

You’ll need to dive into the command line and run a bunch of commands to install the likes of Geany, Rhythmbox, and Chromium on your tablet or phone. There’s no guarantee that all X11 apps will work perfectly, either.

The fingerprint reader on the Meizu PRO 5 handset is now hooked up and working. Head into the settings > security section to scan a fingerprint and get started.

It just got much easier to open an app/message from a notification in the Messages indicator: just tap anywhere on the notification.

In previous builds you could only “open” the app/message/etc. by tapping the small icon on the right-hand side of the notification.

Outside of these two big “convergence” focused features there is plenty of spit and polish to the overall Phone and Tablet user experience.

The on-screen keyboard will now work for X apps, meaning you can finally use the (outdated) version of Firefox to browse the web without a keyboard.

Remember those Unity “love handles” that were on the desktop a few years back (see image below)? Well, they’re back. They’ve been added to Ubuntu Touch to make window management far more tactile and touch friendly. 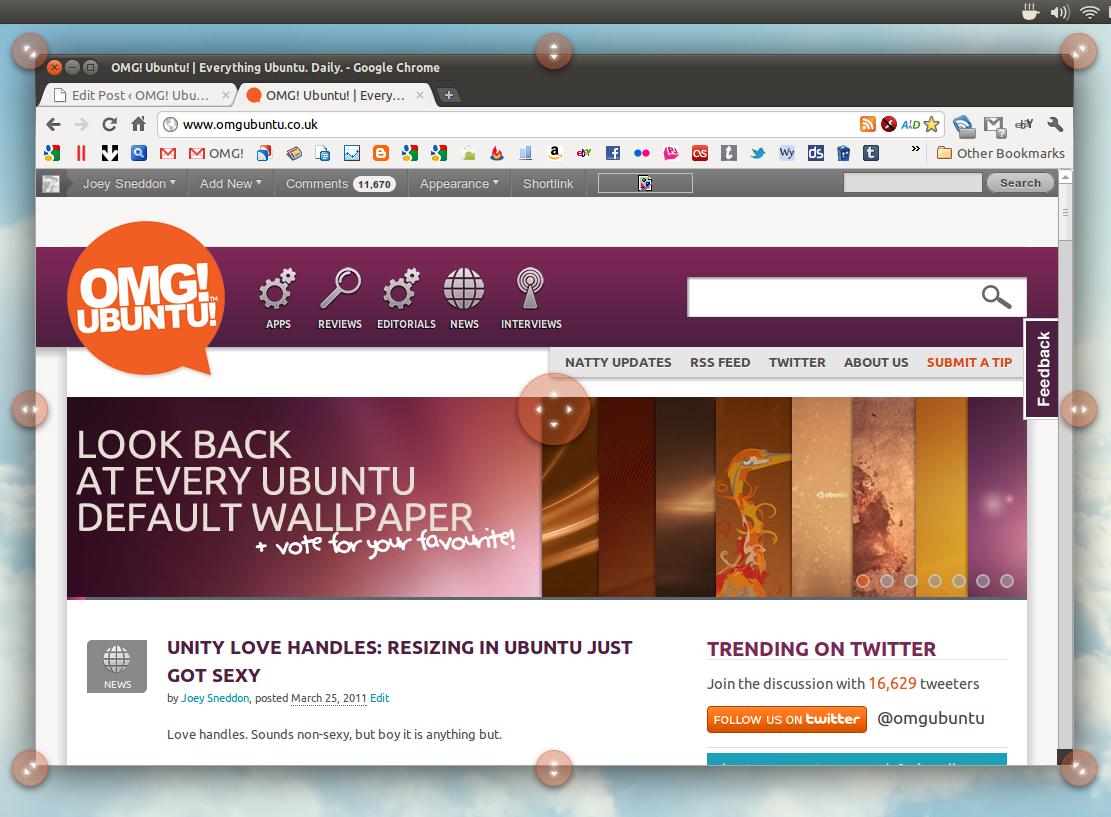 The Ubuntu web-browser app is continually getting better. In this OTA it improves touch-selection of texts, supports link hover text, only loads the tab in view when restoring a session, and adds initial support for zoom.

Want to know even more? Check the OTA-12 commit log for a full list of changes in this update.

How To Install More Desktop Apps on Ubuntu Tablet

All traditional desktop apps are installed in a container. To create a container on a compatible Ubuntu device you need to connect your device to your Ubuntu computer and use phablet-tools to connect to it.

You need to enable developer mode to do this and this comes with its own risks. Head to Settings > Developer to learn more.

2. To install an app from the archive, e.g., Leafpad, in Example Container, run:

3. To remove an app, e.g., Leafpad, from Example Container, run:

Desktop apps with a .desktop file should appear in the X Apps Scope (you may need to add this).

There are near-future plans to make this process more “accessible” to the average Joe.

If you plan on installing regular apps on your Ubuntu Phone just keep in mind that it’s still very early days and not everything will work (also: be prepared for a big hit on battery. Running full-fat apps on a mobile device is a hungry affair).