Do you remember a Linux app called CoverGloobus?

You don’t? Not to worry, I assumed as much.

This simple, stylish desktop music widget has been forgotten faster than a Spice Girl’s solo career!

Its popularity was (undoubtedly) punctured by the arrival of the Ubuntu Sound Menu, quick lists, and other pluggable features in popular desktop environments.

It does help to remember that getting keyboard media control keys to work on Linux was often a nightmare!

But this one-time headliner of the Linux customisation crowd is just as good today as it was in its heyday of the early 2010s.

Like one of the analogous Spice Girls this app is ready for a comeback. 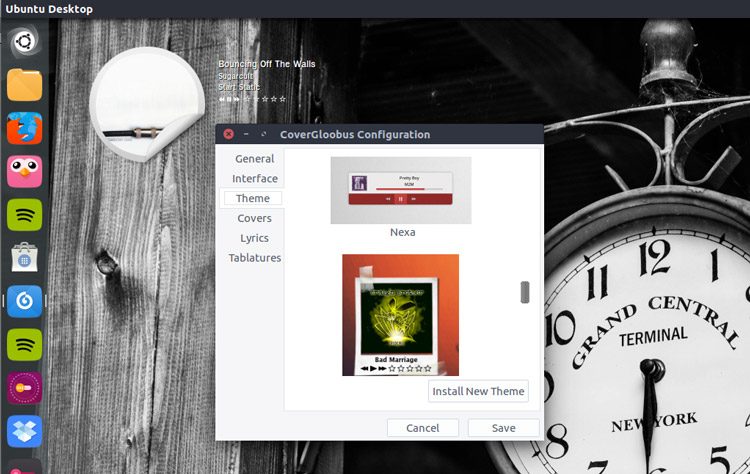 CoverGloobus is an ideal app for music fans who want an easy way to control music playback from their desktop.

The desktop music widget displays album artwork and track info on the desktop. It can show star ratings (if applicable), track progress and time remaining (depending on theme) and, more importantly, puts playback controls within easy reach.

Heck, it can even show lyrics if you want it grab a deodorant can and sing along.

It’s olden but golden; like an 80s synth-pop gem just waiting to be rediscovered, CoverGloobus is still a sound desktop music widget.

It can be installed on Ubuntu and runs without issue, and most popular desktop music players still work with it, including Ubuntu’s default music player ‘Rhythmbox’.

So far I haven’t even touched on the biggest lure of this app: its themes.

A decent selection of themes come pre-installed with app, though some of these have not aged well in the 6 years since CoverGloobus was app du jour.

DeviantArt plays host to plenty more. Hundreds of themes were created for the app at its peak. Some are a little out of fashion — it was the era of glossy knobs, metallic gradients, and skeuomorphic wtf-ery — but many hold up well.

Browse all CoverGloobus Themes on DeviantArt

To install a theme you download, simple extract it using File Roller (or your archive tool of choice) and move the resulting folder to home/user/.CoverGloobus/themes

Why Write About This App?

Why not? Not all abandonware is useless. The app still works, still does what it used to, and still does it better than anything else out there (looking at you, Conky).

So the aim of this post is to do two things: one, remind you that this app still exists, and two, to ask designers amongst you to scratch your creative itch by crafting terrific new themes for it.

2011 was the last time this app saw an update, but it still works on Ubuntu 14.04 or later (plus related distributions) without any major issue.

To install it you will need to blow the dust off a .deb packaged for Ubuntu 11.10 ‘Oneiric Ocelot’ :

Download the .deb right for your system archetcture. Install it the Ubuntu Software Center, Gdebi, or the dpkg -i command in the Terminal.

Launch the app from the Unity Dash (or an app launcher equivalent. You’ll see blank album art appear. Right-click on the blank widget and select preferences to:

As I haven’t had time to test the app with every Linux media player supported by it, be sure to leave a comment with your own successes and/or theme suggestions.