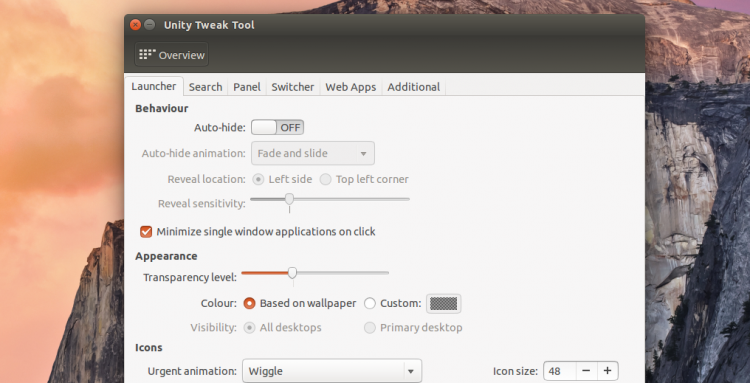 The indispensable Unity Tweak Tool is building on hidden features introduced with April’s release of Ubuntu 14.04.

At present, enabling the ‘unsupported’ feature in Ubuntu 14.04 LTS requires running a command from the Terminal or installing an advanced system configuration editor not designed for users.

By adding a checkbox to turn the traditional task management feature on and off Unity Tweak Tool lives up to its claim of making ‘useful and little known features and settings of the desktop environment’ accessible to the average user.

The application has long been a favourite of ours and is the go-to choice for anyone looking to tailor the default Ubuntu desktop to suit their needs. It offers everything from an exhaustive set of theming controls to extensive options for setting up hot-corners and managing workspaces.

An older, stable version of Unity Tweak Tool, which does not include the aforementioned features, is available to install through the Ubuntu Software Centre.

To track development a daily PPA is also available. Builds distributed through this are buggy and not suited for use on production machines.

For a less drastic way to try the new features you can also grab a Debian installer by hitting the button below.

Madscientist Except the extra privacy is bullcrap. This is the same…
Purism Launches $99/m Librem AweSIM Cellular Service

Panino, o Moço Nothing is being "changed", what's happening is exactly what you're…
KDE Plasma 5.20 Looks Like an Awesome Update