Mark Shuttleworth stoked the flames of expectation for Ubuntu on Phones last year with a single, simple phrase.

In a keynote speech to digital attendees of the (now numerous) Ubuntu Developer Summit, the multimillionaire space tourist teased that an “interesting set of household brands“ were interested in shipping devices powered by his company’s disruptive mobile vision. 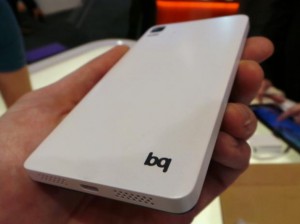 Ratcheting the anticipation factor to eleven so early was an inadvertently risky move.

While his comments gained press coverage, helping the company reinforce the narrative that the mobile industry are viewing the fledgling platform as a serious proposition amidst its many Linux-based rivals, it also drew cynicism; anything less than a Samsung-class partner announcement would run the risk of looking like a letdown.

And so it was. The February reveal of the first Ubuntu Phone partners — China’s ‘Meizu‘ and teeny-tiny Spanish OEM ‘Bq’ — left some of those engorged on the hype feeling deflated.

But could such a cynical reaction have been premature?

In a conversation with Mobile World Live conducted during Mobile World Congress 2014, Shuttleworth reiterated his confidence that big name manufacturers will offer up Ubuntu-powered phones and tablets in the near future.

Canonical, he says, is engaged in behind the scenes conversations with a broad set of OEMs. Not one to shy away from a tease, he mentioned that one recent discussion was with a“very significant manufacturer who previously had their own platform play.”

In addition to hinting at future surprises Shuttleworth also touched on how Canonical intend to make money from mobile devices sold with Ubuntu:

“We charge a small royalty per device for Ubuntu on the device…and we’ve had no pushback from manufacturers to that. They understand that all platforms have an intrinsic cost associated with them.

[Our platform] is open source, Android is open source….our pitch is that we have this clean, beautiful user experience [that allows carriers to custom it] without fragmenting the platform.”

The full ten minute interview can be watched online here.