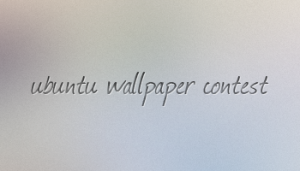 Ubuntu is giving amateur and professional artists alike the chance to have their work seen by millions of people across the world.

The Ubuntu 14.04 wallpaper contest has opened for entries, and invites anyone with an interest in photography or digital design to imprint their passion into pixel form and take part.

A selection of the best submissions will be selected to ship as part of the stock Ubuntu 14.04 LTS desktop, due for release in April.

Ubuntu’s wallpaper competition has become a traditional fixture of the development cycle having run twice a year since 2009 and the release of Ubuntu 9.10 Karmic Koala.

Despite earlier discussions hinting at a thematic arc, the 14.04 contest does not feature an over-arching theme or brief to which submissions should adhere — which is good news for fans of diverse and varied backgrounds.

That’s not to say it’s a free for all. Those taking part should keep to the set of sensible guidelines listed on the Ubuntu Wallpaper Contest Wiki page.

Entries should be added to the Ubuntu 14.04 Wallpaper pool on photo-sharing site Flickr and are limited to one submission per person.

Submissions must be licensed under Creative Commons ShareAlike 3.0, with all attribution declared if elements are remixing or riffing off of other work.

Other than that the usual straightforward guidelines apply:

Deadline for all submissions is March 5, 2014 at 18:00 GMT. Winning entries will be selected by a panel comprising of the previous releases’ chosen artists, with their final choices revealed on March 11, 2014, ahead of the Trusty Tahr UI freeze.

In need of inspiration? Take a look at previous years’ winning entries.