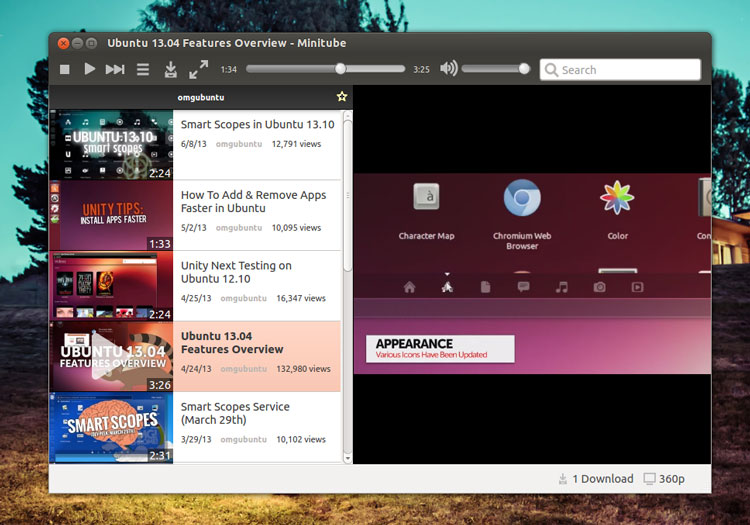 Minitube 2.1, the latest version of the popular desktop YouTube player, has been added to the Ubuntu Software Center in 13.04.

We touched upon a few of its new features last week, but now we have the package itself to play with here’s a better look at the most recent improvements.

For us the ability to ‘subscribe’ to a YouTube channel without the need for a YouTube account is the headline feature of this update. It’s a convenient way to stay up-to-date with videos from your favourite channels (including us, right? ;)) without needing to enter a login, or sign up for anything.

‘Subscribing’ to a channel is easy. When viewing a channel in the sidebar (either by searching for one directly or clicking on a channel name) you simply need to hit the ‘star’ button to add it to your favourites.

If you’re at your computer when a new video is uploaded you’ll even get a notification bubble to let you know there’s something new to watch!

On the flip side, those who would like to use their YouTube accounts to access their subs and faves will be disappointed, as with those who like to comment. But, honestly, this is part of MiniTube’s charm; the lack of feature bloat results in a lightweight little app that focuses on the important stuff.

As highlighted in our original post on this release there are a number of additional improvements, including:

The Ambiance-themed toolbar introduced in the 2.0 release has been refined further, dropping the text labels for buttons.

Minitube is available to install straight from the Ubuntu Software Center in Ubuntu 12.04 and 13.04. If you’re in Ubuntu just the button below to begin installation, otherwise make a mental note to install it next time you are.

MiniTube 2.1 is free, but requires an Ubuntu One account to install.