The next major update to Windows 8 will add a new search experience to the Windows 8 desktop – one that Ubuntu users will already be familiar with.

Windows 8.1 overhauls the inbuilt Windows Search feature to offer results not just from local apps, files and settings on the computer but also from the web and online media sites.

“You can see everything you can do on the PC in one pane. I can launch apps, play music; it brings back web results.” – Microsoft

The idea of fetching and presenting a mix of online and offline results is a logical one in light of the dividing lines between desktop and web blur into irrelevance elsewhere on the desktop (e.g. Unity Web Apps; Chrome Packaged Apps).

So while Microsoft haven’t ripped off something exclusive to Unity it is fair to say that Ubuntu was the first OS to pursue and make the ‘search anything, anywhere’ concept a key part of the Ubuntu desktop.

Idea aside, that’s pretty much where the similarities end.

Where Unity presents its results in the Dash, making use of Unity previews to add actions and further information, Windows 8.1 has what it calls “Search Heroes”.

A ‘Search Hero’ is created ad-hoc when a users types a search query. Described by Microsoft as being ‘app like’, they offer a contextualised view of results returned for a search term. 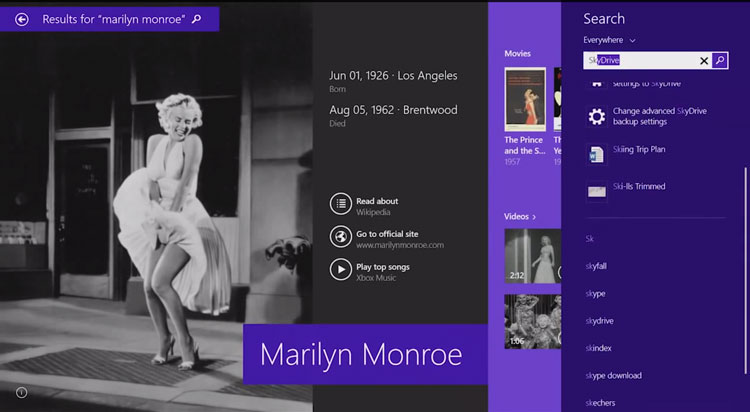 Unity is aiming to do something similar with the new Smart Scopes Service, which aims to find what it is you’re searching for then offer up results that match it.

Given that Microsoft have the advantage of owning an entire search engine, not to mention a series on media-content sites, there’s no doubt that its results will be incredibly finely tuned.

The most important point about the feature’s arrival is that it shows that good features catch on; it’s nice to see Ubuntu’s Unity vision being vindicated by its competitors.