It might not be the strongly-rumoured Steambox games console itself, but on the floor of the Consumer Electronics Show 2013 a physical prototype of a Steam-powered mini-PC has been on show.

Valve have teamed up with hardware vendor Xi3 to build a modular, miniature PC, which is currently code-named ‘Piston’. 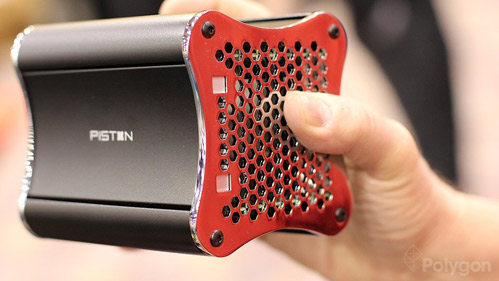 Of the team-up Xi3’s founder and CEO Jason Sullivan called it ‘the beginning of a new era’ for his company.

“This new development stage product will allow users to take full-advantage of their large high-definition TV displays for an amazing computer game experience.”

“As a result, this new system could provide access to thousands of gaming titles through an integrated system that exceeds the capabilities of leading game consoles, but can fit in the palm of your hand.”

As diminutive devices go the Piston, even this early on, has a unique look of its own.

Engadget and gaming blog Polygon stopped by the Xi3 booth at CES and got chance to toy with the physical part of the console. But other than some educated guessing on its possible internals  – a quad core chip, low power draw, and 1TB HDD – there’s precious else to be had, especially on the software front.

Will It Run Linux?

So it’s not quite the Steambox, but it is a box capable of running Steam in your living room. But will it run Linux?

Rumour has it that the Steambox will run Linux, which isn’t surprising given the investment and time that Valve have put into porting their client and game titles over to platform. A Windows-based console would come with licensing restrictions, overhead and, if it was to use Windows 8, a lock-in to the Windows Store.

Given how closely Canonical and Valve have worked together over the last 12 months, and that Canonical have a vested commitment to Ubuntu as a platform, the logical choice would be Ubuntu. Ubuntu can be run free of a GUI (handy for Valve since it will likely use Big Picture Mode as its interface) but would also free Valve and Xi3 from the duties of distribution maintenance.

Adobe Are Not Giving Photoshop Away Afterall…
Read Next