Take one Ubuntu Community team, sit them in front of webcams and make them work for 24 hours solid.

These range from Autism Research Trust and GreenPeace, to the innovative ‘Let Kids Rock’ – a musical charity that provides instruments to disadvantaged schools in America. 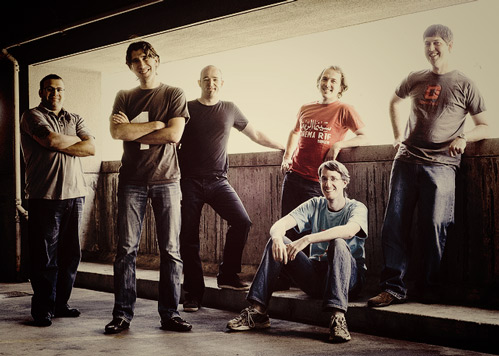 Think of it like Chat Roulette without the naked weirdos; or the national news without the depressing bits; or a cheap Sci-Fi monster movie …with more realistic zombies (which the cast are scheduled to turn into at around hour 18).

And the best bit? They’re not even half way through yet. The blinkered, weary-eyed, yawn-filled moments that will lead to insanity and unintentional nuggets of comedy gold are yet to come.

So raid your Dalek money-box for $5 or more, pick a member to donate it to (Greenpeace is lagging behind by some margin, no pressure) and send it their way.

If you’re a UK taxpayer don’t forget to check the ‘gift aid’ box so that Her Majesty’s Revenue & Customs add an extra 10%.

Donate to Get Rid of Jono’s Beard

Were I an infomercial I’d yell “But Wait! There’s More!” at this juncture.

Jono Bacon has agreed to shave off his facial hair live on air should he personally hit the £3000 before the “webcast-a-thon” ends.

Now if the sight of 6 grown men succumbing to lack of sleep wasn’t a lure enough, or Jono potentially loosing his beard, I’ll be popping on at 9PM BST to ask the team some tough (and potentially barmy) questions.

If there’s something you’d like asked (and answered – I won’t take no) then offer it up below. See a question below that you’d like to see answered? Up vote it.

So for more details on the participants, their charities, or to watch the bizarreness unfold live before your eyes head to marathon.ubuntuonair.com/