Miguel de Icaza, one of the founders of the GNOME project, has said that OS X has ‘killed the Linux desktop’.

He cites rapid development ‘breaking both open source and proprietary software alike’, as well as the ‘incompatibility across Linux distributions’ as being key reasons for Linux’s failure to take hold.

“This killed the ecosystem for third party developers trying to target Linux on the desktop. You would try once, do your best effort to support the “top” distro or if you were feeling generous “the top three” distros. Only to find out that your software no longer worked six months later.”

Supporting Linux on the desktop, he argues, became too much hassle for independent developers who weren’t part of the clique.

“We alienated every third party developer in the process. The ecosystem that has sprung to life with Apple’s OSX AppStore is just impossible to achieve with Linux today.”

That depends entirely on where you look, how you look at it, and who you listen to.

Linux as a desktop OS has a market share of around 1-2%. It varies depending on the source of the statistics.

We know that Ubuntu is the largest Linux distribution, and that its user base is continuing to grow. Canonical continue to strike new deals with various hardware manufacturers around the world, in turn leading to more users of Ubuntu (and thus Linux as a desktop).

Third-party software developers – albeit mainly gaming ones for now – are also becoming very interested in Ubuntu as a viable software platform. Valve, Unity3D (the gaming engine) and a slew of indie developers are all porting their wares over to support it.

This shows that there is a market for Linux, even if it is small.  And ‘small’ is only relative in comparison.

Take for example Google, who use a lightly-modified version of Ubuntu 12.04 internally. They are not Canonical’s biggest support client. This says something about the size and volume of Ubuntu enterprise deployments around the world.

Most of which will use “Desktop Linux.”

Icaza also doesn’t take into account Canonical’s work with Unity, which is extending beyond traditional PCs to encompass TVs and mobile phones. This forward thinking (if at times controversial) project is aimed at ‘future-proofing’ Ubuntu and, as a result, the Linux desktop.

In the eyes of some Linux may well be a failure by comparison to other players in the market. But that’s perceptual, which is not the same as it actually being one.

And whatever issues proved barriers to success in the past are clearly being overcome as interest from both big-name hardware and software vendors proves.

Unless those companies are into financial necrophilia and get a kick out of ploughing money into dying projects (which is highly unlikely in a capitalist market) then the Linux desktop is far from being dead.

Nevertheless, Icaza’s opinions make for an interesting, thought provoking read even if you don’t agree with what he says.

Read ‘What Killed the Linux Desktop’ 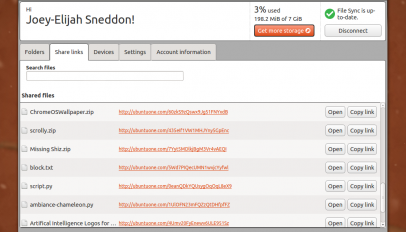