The unofficial – but totally awesome – Ubuntu One Indicator has been updated with a number of nifty new options and improved memory performance.

The applet is useful for Ubuntu One users who want a more detailed look at the status of their Ubuntu One account than that offered by the default Messaging Menu entry, but without the need to open the main Control panel window.

The ‘major sell’ of this update is clearly its top-to-toe rewrite in the Vala programming language. This has resulted in the applet becoming super memory efficient.

Older versions of the indicator would typically sit on around 40MiB of RAM whilst open. The new version only uses around 3MiB.

Links to quickly open your Ubuntu One folder, the official website, or the control panel have been added to the menu

Estimated time for file transfer added to the drop-down

If you were annoyed by having to manually start the previous version you’ll be pleased to know that the applet now sets itself to auto-start when you login. 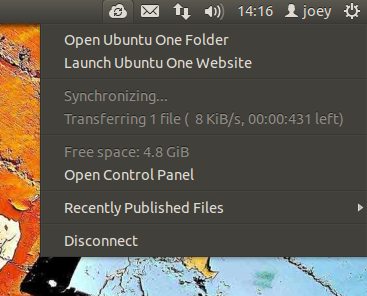 Ubuntu 12.04 users can install the applet by running: –

Alternatively, if you don’t fancy adding PPAs to your system, you can download the .Deb files from the buttons below.