A new ‘stable’ release of image editor Pinta is now available to download – but is it any good?

That answer will depend on how patient you are. 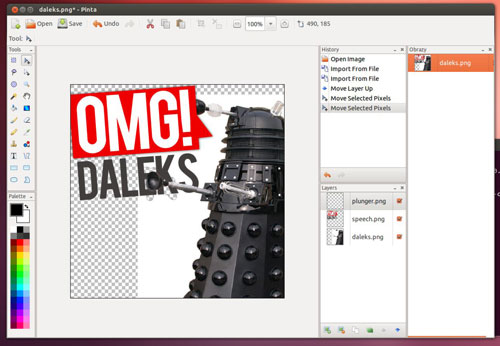 I’ll get the ‘drawbacks’ out of the way first. For despite this latest release of the one-time Paint.NET clone being called ‘stable’ it is, sadly, as buggy in use as ever.

I spent around 30 minutes playing with the application to get a handle on the new features, and snap some screenshots for this post along the way.

During that time Pinta repeatedly crashed or, worse, froze when attempting to do basic tasks – like rearranging layers. In fact, the lock ups it caused were so bad that I was had to hard-reboot my machine eight times.

Eight reboots in 30 minutes because of one application. So my advice to anyone thinking of using it to complete work is to be cautious and have Photoshop or The GIMP on standby.

On to what’s new in this release.

Pinta 1.2 can be installed in Ubuntu 11.10 by adding the Pinta Stable PPA, updating, and then installing the app through the Ubuntu Software Center.

Ubuntu In The Wild… As a Car Numberplate
Read Next