Have you tried an Ubuntu cola?

It might sound like an odd question, but if you’re British, Swedish, Norwegian, Belgian, Irish or French then there’s every possibility you have… Jolly big disclaimer time: Ubuntu cola is not related to, endorsed by or otherwise connected to the operating system or Canonical.

Ubuntu Cola was the first UK ‘cola’ to be badged with the ‘Fairtrade’ logo thanks to its use of Fairtrade sugar from co-operatives in Malawi and Zambia. 15% from the sale of each can goes directly to the African communities that help make it, via the Ubuntu Africa Programme.

Whilst I’ve known about Ubuntu Cola almost as long as the operating system itself, little did I know that this legendary drink (as no-one else is calling it) is not only available to buy in my own country but created here.

Ubuntu Cola can be purchased in various independent, ethical and whole food retailers around Europe and select cities in the USA. See the official site to find a stockist near you.

For UK users the easiest place to find a can is in “upmarket” supermarket chain Waitrose, where a can of the good stuff costs 60p – a single penny more than a can of “proper” Coca Cola. 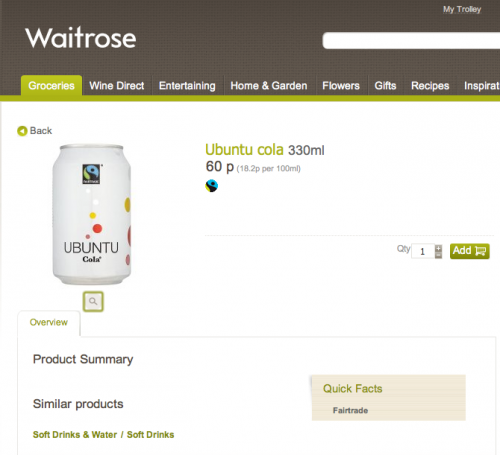 If any kind of Cola is going to taste nice, it’s going to be Ubuntu Cola, right?

Have you tried Ubuntu Cola? What did you think? Let us know in the commen-toes below-ha…

Super thanks to Jamie Luckett

The Ubuntu 11.10 Default Wallpaper
Read Next