It’s now the morning of day 2 and people are slowly starting to arrive at the Hackerspace.be room we call home during the GNOME+Mono hackfest.

On day one we were so busy that the first task of day in fact is posting the update. 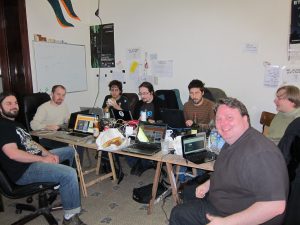 Olivier demoed his TV show support for Banshee and the code is now at a stage where wider testing and feedback would be useful from people who know how to compile from git though it does still depend on gio-sharp from git which is broken (hence no instructions or ppa is available presently). Aside that Olivier spent most of day one familiarizing himself with the gir output and working on implementing the foundations for our new binding generator with Alan.

Bertrand worked on adding unit tests to dbus-sharp to ensure stability and compatibility.

Rodrigo, one of the SGen garbage collector developers, decided to join us unannounced and has been very helpful in debugging issues and figuring out solutions to some of the problems we have encountered so far. He mostly worked on SGen but has been an invaluable help due to his deep understanding of Mono.

Lluis, one of the MonoDevelop developers, is another unexpected visitor and while he only stayed till lunch time. Normally he works on MonoDevelop and today we grossly abused his presence to fix MD as work uncovered problems with our tools. Lluis’s stay with us was short but surprisingly fruitful.

Jérémie does all kinds of things around Mono, the OMG crowd is likely  to know him mostly as being the maintainer of the new DBus-sharp bindings. Work he continued today. It now seems that dbus-sharp is the horse are going to bet on, the porting effort for developers is minimal and allows for a lot of workaround code to removed while adding stability.

Alan needs no introduction. He fixes Moonlight for a living, and does magic things to portable players so they work with Banshee in his spare time. All through the hackfest he has been working hard to get the bindings generator to completely handle one small test case library. A lofty goal which was reached late on day one when gdk.pixbuf was fully bound and generated C# code which compiles. Gdk.pixbuf represents about 4000 lines of gir xml, whereas gtk’s 80.000 lines of gir xml still generates 150 errors and 25 warnings when we compile the generated code. The aim for day two is to reduce these numbers to as close to zero as humanly possible.

Tim is a newish face around F-Spot, he has been working on making F-Spot run on Windows and improving F-Spot considerably by removing the last remaining bits of C and adding a Community Extensions framework like Banshee has. On day one of the hackfest he has been ripping out the last problematic bits of C code from F-Spot. This will F-Spot to work fully within MonoDevelop and allow new contributors to approach the codebase with greater ease.

On the last night of FOSDEM we also went out for dinner and beer with a lot of the Mono gang so I got to meet Jo Shields, Aaron Bockover and Ruben Vermeersch as well as a bunch of other cool people. Sadly I have no pictures as all my equipment ran out of power on the trip to Belgium (and you try to find an available power plug at FOSDEM and time enough to recharge with all those great talks).

Day two has started and while Lluis has left us, we are joined today by Jonathan Ernst who works on media-player-info. Together we are all trying to find a good solution for getting media player devices (mp3 players, phones, etc.) working with close to zero effort on the part of the user when the device is not supported. The current plan is to write a little helper application which will collect the required information and let us upload some test files for confirmation of format support (since devices typically do not export this).

With thanks to GNOME for sponsoring the event 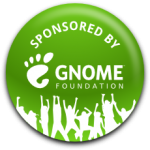 How to Make a Docky theme [Guide]
Read Next