From Ubuntu 11.04 onwards the Ubuntu desktop no longer supports the traditional GNOME panel applets many of us have become accustomed to.

These new breed of notification area entries are designed to be consistent and unified in look and function, thus leading to a desktop more in tune with itself and with its users.

Just as with GNOME Applets you’re free to pick and choose which of these you use, install or run, so here’s a quick run down of the most popular ‘App indicators’ and ‘Indicator Applets’ presently available along with all the links/info you need to install them.

Note that for simplicities sake we’ve opted to not mention indicators that ship with Ubuntu by default – Tomboy, Transmission, etc.

By design Ubuntu One doesn’t come with a status area icon, an oversight that many users sorely miss.

Roman Yepishev did a more than moan about missing it and fashioned this gorgeous ‘Ubuntu One indicator-applet’.

It lets you view and monitor your Ubuntu One accounts sync status with nothing more than a single click on on the panel icon. 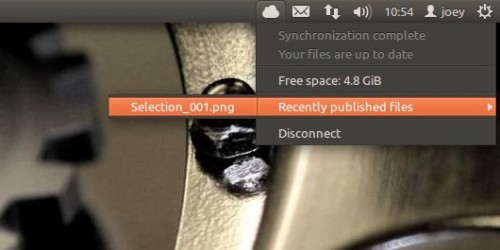 Installation is a breeze using Roman’s PPA for Ubuntu 10.04 through 11.10 users.

Open a terminal and enter: –

Once installed launch from the ‘Applications > Internet’ sub-menu or by searching for ‘Ubuntu One Indicator’ in the Unity Dash.

Departing with the overly utilitarian format of other indicators, ‘Indicator-SysMonitor’ keeps things very simple: it only displays CPU and RAM usage on your panel, with an ‘Exit’ button being the only menu entry. Basic – but sometimes that’s all you need.

A .deb package for various Ubuntu releases, including 11.10, can be downloaded from the project homepage @ launchpad.net/indicator-sysmonitor/+download

Accidentally hitting the laptop track-pad is a pet peeve with a lot of users – in fact it’s how this tiny Indicator Applet came to be! Options for disabling/enabling the trackpad, as well as offering the ability to configure a keyboard shortcut to toggle this, is available via the indicator.

The indicator is available for Ubuntu 10.0 through 11.10 users via the official PPA : The indicator is available for Ubuntu 10.04 through 11.10 users via the developers official PPA.

Open a terminal and enter the following commands: –

Monitoring CPU usage is a top priority for many users on portable devices. By limiting the clock speed of your laptop/netbook you can, in theory, extend your battery life a little lone. CPU-Freq offers all the functions of the standard GNOME Cpu-Freq applet but in indicator clothing. Be alerted to when the caps lock, scroll lock or number lock keys are ‘on’ or ‘off’.

‘Piffle?’ you say? Although my keyboard does have a ‘caps lock’ light – I never remember to look at it so, for fellow unobservant folks out there, this is worth its salt. Installation instructions, along with a bit more rationale on the ‘why?’, can be found here.

Are you one of those people who copy and paste a lot? If so you may already use a clipboard manager to, well, manage your clipboard. With anticipation of Natty’s depreciation of familiar GNOME applets be sure to cast a mental CTRL+C over the following indicators replacements.

‘Pastie’ looks and does what you’d expect it to. With a mono-icon and ‘Clean history’ button it sits as one of the best of its ilk available to Ubuntu users.

Installation instructions and a bit more information is in this post. Ubuntu 11.10 is not currently supported.

A similarly purposed indicator is Diodon. Lacking a mono-panel icon, it does look out of place when using Ubuntu’s default theme. That said it’s a light and capable tool worthy of consideration. Ubuntu 11.10 users will need to add the development PPA should they wish to install it.

An Indicator-based fork of clipboard manager ‘ParcelLite’, ClipIt boasts very little to differentiate itself from rivals. The lack of a ‘clean’ option within the menu list makes it the perfunctory third choice in this list.

Safely remove USB thumb drives, mounted SD Cards and more with ‘USB Safe Removal application indicator’ (Or Indicator-unmount’ for short ;) ). The tiny app doesn’t sing, it certainly doesn’t dance ,but it does do what it says on the tin: let you quickly eject mounted drives.

TinyGrab inspired screenshot tool ‘Lookit‘ is a mini-marvel for us bloggers, many of whom are seemingly insatiable for ‘yet more’ screenshots to prop up our dubiously written texts.

As an app Lookit is neat, configurable, allows for quick capturing and uploading of screenshots and runs directly from the notification area. No extra windows, no more hassle. A beta release of LookIt can be downloaded in .deb from from the project page or installed from the testing PPA: –

The latest stable version can be installed using the Lookit stable PPA: –

We’ve covered this quick-launch applet for Virtualbox machine in depth recently. Suffice to say it’s nothing more than a glorified quick launch menu for your VirtualBox machines.

The applet, currently only available for Ubuntu 10.10, can be installed by running the following commands in a Terminal: –

Caffeine helps prevent Ubuntu from ‘sleeping’. Controlled directly via the notification area, Caffeine is easily one of the best uses of an Indicator presently available.

Ubuntu 10.04 through 11.10 users need only add ‘ppa:caffeine-developers/ppa’ to their software sources to install the application: –

Panel-based RSS reader ‘Feed Indicator’ is simple to use and nifty to have around if you’re not a huge RSS-head. You can add as many feeds as you like, set notification preferences, refresh rates and more. Download can be found on the project page @ code.google.com/p/feedindicator.

Installs to the ‘Applications > Internet’ sub-menu.

The default power indicator in Ubuntu 11.10 works out of the box, but in previous releases support was patchy at best.

For Lucid, Maverick and Natty users installing the Battery Status Applet is a no-brainer. It offers up stats on your current battery charge, grants quick access to performance scaling and Power Management settings, all within easy reach. Battery Status is available for Ubuntu 9.10 through 11.04 via the following PPA:

The applet will, initially, run as a standard gnome applet. To intitate ‘indicator applet’ mode you will need to run the following command in a Terminal : –

Switching workspaces via an indicator is an idea that, on paper, seems over-kill, particularly in light of other, faster methods.

And then I tried it.

Now installed by default in several Ubuntu-based distributions, this mini switcher is a lot more useful than many give it credit for. It’s available for Ubuntu 10.04, 10.10 and 11.04 users only. Find install instructions (and more information) about this tool at this link.

This applet works in tandem with the tray based wallpaper changer DesktopNova. It’s easy to use and easy to install, making it a perfect app for impatient wallpaper lovers.

Full instructions are here, along with how to install.

Similarly purposed to the above, ejecter (sic) lists mounted drives and allows for one-click un-mounting. No support for network folders – like ‘USB Safe Removal has – but chances are you don’t need it.