Tibesti is a ‘simple screencasting’ tool for Linux that allows you to record your desktop, speaker output and microphone at the same time, rendering output to the file type of your choice.

Like other popular screencasting tools – such as Kazam and GTK Recordmydesktop, Tibesti allows you to not only select the size of the capture area, but the quality and audio devices, too. 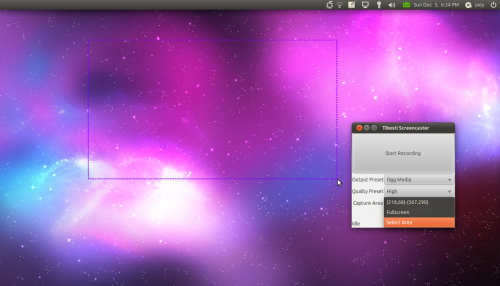 Output formats include, by default WebM & Ogg. AVI, MKV and more are available providing the necessary codecs are installed.

The tool is not without some drawbacks. Even on the ‘very high’ setting the outputted video still contained a general ‘lag’ caused by dropped frames.

The entire applications also freezes during video encoding – which may lead you to assume that it has crashed.

Tibesti is available to install from the following PPA.

Once installed it can be launched via the ‘Applications > Sound & Video’ sub-menu.