More information has surfaced on the new Ubuntu-powered tablet device we wrote about last week.

The ‘TENQ P07’ tablet aims to launch early next year an will sport Ubuntu 10.10 atop an 1.6Ghz Atom CPU, 2GB of RAM and a 32GB SSD, the manufacturers told Gizchina.

Rounding that out is a 10.1 inch capacitive (presumably multi-touch) screen, webcam, Bluetooth, WIFI, HDMI out and a MicroSD reader. 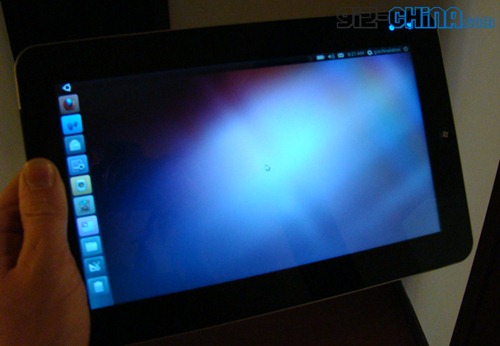 In a quick interview with GizChina the developers behind the Tenq mentioned some further exciting additions that users can expect:

“We’re just working the kinks out of the  software now, mostly just brushing up the touch interface and also working on the best possible on screen keyboard display.”

It’s this latter bit which excites me most: the creation of a decent on-screen keyboard for Ubuntu sounds awesome.

Why? Take a look at the Ekoore ET10TA tablet running Ubuntu 10.10 Unity and you’ll see that the default touch-keyboard isn’t the most exciting…

The Ekoor ET10TA running Ubuntu 10.10 Unity: not the most intuitive keyboard…

Via Giz China, thanks to Brandon & Remko