Elephants and readers with a good memory may remember an ‘ambient boot splash’ proposal we featured at the end of October.

For those unaware the notion was simple:

“…the idea of an OS that uses the time to greet you appropriately, giving the impression that it cares.”

At the time the idea was just that: an idea but that’s fast changing thanks to Shnatsel – who’s already got a ‘greeter script’ working. 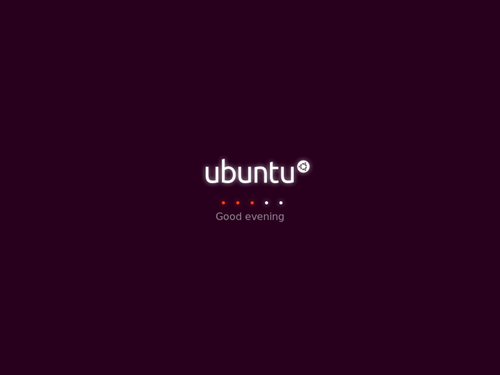 “I was really inspired by the ambient boot splash mock-up you covered a while ago and decided to implement it. I’ve already made a script which shows a greeting on boot and a goodbye on shutdown. “

We loved the idea and many of you did. If you feel you could help Shnatsel he’d be most appreciative: –

“I think I know how to implement the rest using the script engine without altering it, but I can’t do it all myself. At least one more coder and a designer are needed to complete this.”

There’s also a PPA with the greeter script available to install, under caution, @ launchpad.net/~shnatsel/+archive/plymouth

“On the technical side, I’m going to tell plymouth what time of day it is via plymouth –update call, and switch the look of the theme accordingly. “Good %timeofday%” message also could be re-implemented as a picture.