The timer, displayed on top in the bundled BadChoice3 theme (see below), helps give you an informative status update on playing track duration.

To the left of the theme theme you can see the newly introduced animated-progress bar. This not only looks pretty but lets you manually skip forward/backwards through the playing track using your mouse. 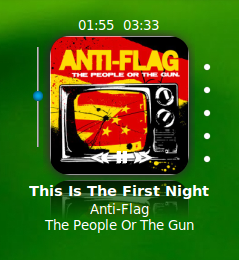 In addition to a few shiny knobs and widgets there has been a lot of attention paid to the ‘CoverGloobus-Config’ pane. It’d get boring to list every part but notable changes include a very pretty ‘gallery’ for previewing themes (below), expanded lyrics provider plugins, a bevy of new features for controlling the appearance of themes (including scale!) and new download sources for album cover art – including Discogs. 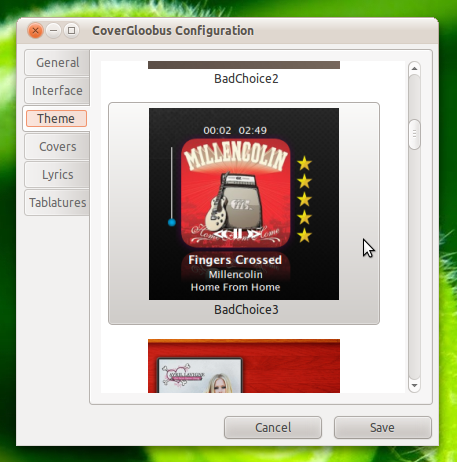 These features are available in the development branch of CoverGloobus on launchpad and not intended for everyday use.

If you’re a theme maker interested in adding some interactive support to your designs you can grab and install the branch using the commands below: –

This will overwrite any existing CoverGloobus installation so make a back-up of anything you deem important in case of accidental deletion.

Alternatively 1.7.6 is available for installation via the CoverGloobus Development PPA.