Mark Shuttleworth recently posted to the Ayatana Mailing List regarding the idea of representing workspaces in the Unity launcher.

The idea in reference was based on a mockup posted in this bug and certainly looks good: 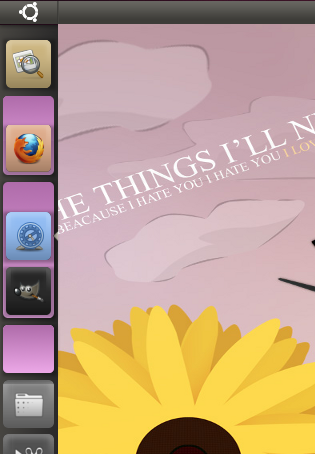 In the above picture, the purple boxes represent workspaces. The user can also move windows among workspaces easily.

Cool! When will we see this in Ubuntu?

Well, you won’t. At least not yet.

Mark, responding to the mock up, affirmed that all workspaces in Natty will remain represented by a single icon on the launcher.

The experience in using the solo icon will be improved however: –

By default, in Natty, this reveal all windows of the current workspace as a “desktop spread” rather than the Maverick behaviour of showing all the workspaces.

You will be able to jump smoothly between workspaces in this view, and move windows from the current workspace to any other workspace very easily.

However, the number of workspaces will be limited to 4 in Natty, with experimentation under way for more workspaces in line with the interactions we support in Natty.

Mark didn’t reveal the release in which we would see a complete implementation of the above idea.