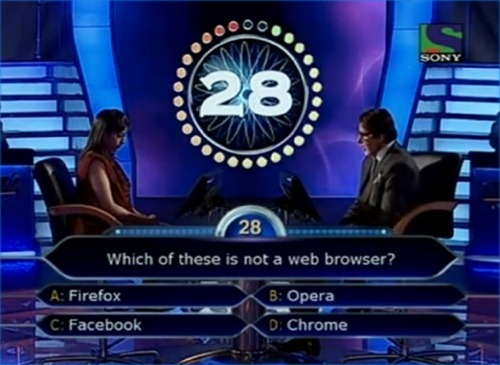 Most readers landing upon this page wouldn’t require a seconds hesitation in answering the question posed above.

But for a contestant on India’s version of ‘Who Wants to be a Millionaire?’ it required an entire audience vote to pick an answer.

The contestant above isn’t alone in not being clued up on the divide between ‘the web’ and the tools one uses to access the web. Google’s infamous vox-pop on the streets of New York also proved this with less than 8% of  people quizzed able to answer the question of ‘What is a browser?’.

But does it matter?

As an advocate for Ubuntu I’m acutely aware of how easy bamboozling casual users is when rolling off terms like ‘web browser’, ‘CPU’, ‘RAM’, ’64 bit’, ‘graphics chip’, ‘taskbar’, etc. It’s all a densely packed jargon-jungle for which they have no inclination to explore.

But dig a little deeper and people are actually a lot smarter than given credit for. Had those people in New York been given a laptop and asked to log in to Facebook the majority would’ve managed it fine.

Whether accustomed to the ‘little blue E’, ‘the orange ball’, ‘the big red O’ or the ‘rainbow wheel’ people know how to get online and it’s this ‘doing’ part that matters most.

Home » Editorial » Which of these is not a web browser?