Editors of this ilk share one common goal: to get you writing. To do this they shove any potential distractions – such as Gmail, Tweets & Pokes – out of the way, presenting you with a full-screen, minimal and sole-task orientated writing environment.

It’s like a yoga mat for writing – it makes things easier but it’s still up to you to do the hard work.

The design, layout and feature-set of  applications such as TextRoom are not skewed towards people needing to type up accounts, add pie-charts or over-stylise their CV’s with copious amounts of crappy clipart but exist for signal transducing the words in your head into words on screen.

Long time followers of OMG! will note that we have featured other ‘distraction free writing applications’ (DFWA from herein) previously: –

TextRoom compares well to its kin. On first run you’re presented with a highly professional and streamlined full-screen interface,

Along the bottom is, rather uniquely, a status bar containing a live word/character/page count (you can choose which) and – get this – a clock.

Other editors in this niche view time as a distraction. Not so TextRoom and I for one really appreciate its being there.

Other than this there is nothing else to look at; just a dark canvas waiting for your creativity to paint upon it.

Just because the interface is not cluttered with toolbars and buttons doesn’t mean there aren’t options.

A well stocked ‘Options’ window (Accessible by F2 – more on key commands later) gives you a massive amount of control over how the editor looks, works and behaves.

Set an auto-save interval, select a ‘target/deadline’ for word counts and due dates, which is quite good, enable scrollbars, splash-screen or full-screen, change the colour, the sound or even the language. 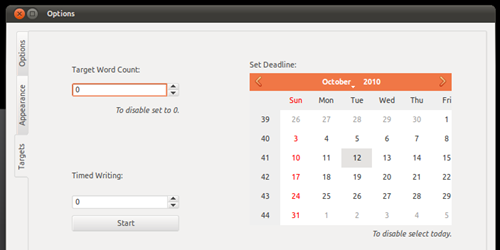 One strand where TextRoom flails compared to rivals is that it takes the notion of ‘no distractions’ a wee too far: it tries hides everything from you.

That’s the point right? Well, yes & no. It took me a long time to find out that F1 brought up an options screen. Had I found this sooner I would’ve been writing sooner. Until then I assumed that whilst I could write I couldn’t save!

This may suit shortcut hounds  but for me? Doing everything using the keyboard is a no-goer.

There was one rather irritating issues that riled me up on first run: the noise.

Every key press in TextRoom results in an admittedly quaint – but certainly not distraction free – typewriter-esque sound.

It sounds retro-chic for all of 2 seconds before becoming the aural equivalent  a nail being hammered into your head on every stroke.  Thankfully this can be switched off.

Spell checking is a bit lame – it displays a red-sqiggly line under a typo but offers up no suggestions on corrections.

The most confusing situation occurs when you pass the default page height. A horizontal scrollbar displays on the bottom (yes, for scrolling vertically) and looks awful.

TextRoom is available for all major operating systems. Ubuntu users can find a .DEB installer of the latest release using the link below.

TextRoom is a highly configurable and competent writing aid. Whether or not you consider it to have as much joie de veve as similar apps is entirely down to personal choice.

It probably says something that the majority of this post was written in FocusWriter.