What better way to celebrate upgrading to Ubuntu 10.10 than to check out NeverNote, an Evernote clone that gives you access to your Evernote notes!

I’ve been trying out NeverNote for a couple of days now, as I finally got my Android Phone and wanted to be able to easily sync notes between Windows, Ubuntu, my iPad, and my handset. As any of you who’ve tried know, Evernote doesn’t work on Ubuntu. Sad day.

While previously, people who wanted the syncing goodness of Evernote on Ubuntu had to deal with either a) installing old versions via Wine (and thus dealing with the ugly interface that happens in wine) or b) using only the web version, which meant no offline access and also meant sacrificing interface usability.

Well luckily, some very clever fellows have come up with NeverNote, which is essentially just a copy of the client for Ubuntu, to allow you to connect to the cloud and edit and view your notes more or less just like in Evernote. 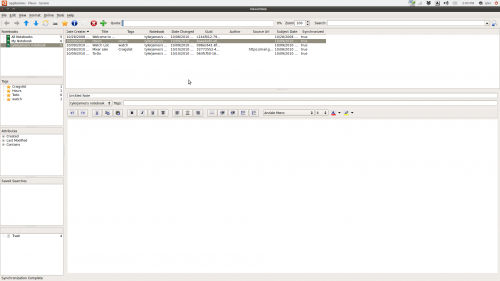 As you can see, anyone familiar with more or less any software ever will quickly find themselves in familiar territory. Different sorting options present themselves on the left, and above we have the list of notes that corresponds to that particular set of sort rules (i.e. If I click on a tag like Craigslist in the left column, then all notes tagged with Craigslist will show up in the top). Then, in the larges available space, the actual selected note shows up.

The first things that you might notice about NeverNote is, quite frankly, it isn’t very pretty. It’s written in Java, which I have no problem with, but it provides it’s own icons, has weird outline box things on the formatting options, and has lot’s of other little harsh edges that, to me anyway, are just frustrating to look at for too long.

However, it’s still much better than the awkwardness that comes from installing via Wine, which gives you all sorts of weird fragments and black outlines and Windows 95 scrollbars.

Even thought stock Evernote is dang pretty, though, it isn’t about the looks. It’s about the works. And for that, NeverNote does a commendable job.

It syncs, fairly quickly, and it syncs across all fields. Tags, attributes, saved, notebooks; all are contained neatly within. Because it is more or less just aggregating an online service, just about everything you would expect makes an appearance, with only one or two little foibles, which are a bit easier than pointing out the good stuff, because, quite honestly, it does everything that Evernote does just fine.

First off, there’s no ability to do Ink Notes, which more or less turn the new note into a free for all scribble place, but with Evernote’s awesome text recognition. It just isn’t there.

In Windows, I write Hello and it looks like this: (yes, I know, messy. :D) 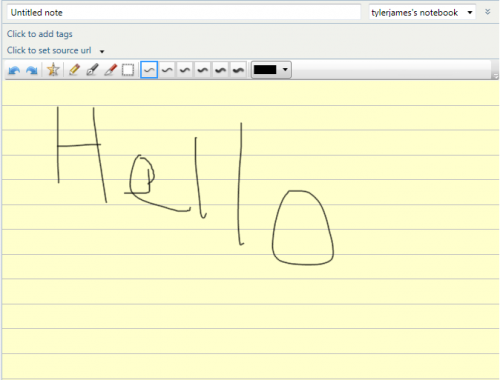 When it syncs over to Ubuntu, I get this: 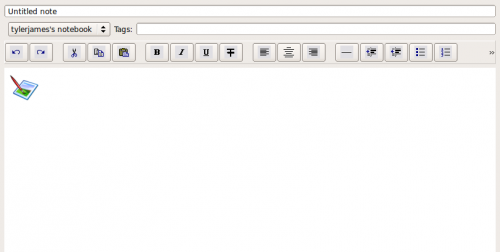 Now, for many of you this may simply not matter. For me, it’s not such a big deal, because I can’t view Ink Notes on Android either (if someone knows how, let me know) or edit them on my iPad (for whatever bizarre reason).

However, for those of you with tablet pc’s and the like, this could be a problem. I mean, heck, you can only create them on Windows or Mac, and you can view them online or on Windows or Mac, so it’s not really a wide ranging feature yet. So no biggie.

The rest of my complaints are more or less entirely interface, not feature.

I already mentioned lack of GTK integration and theme respect. But there are a number of other things which range from frustration to distraction.

First up, there are a number of controls that are just completely unnecessary and, thus, annoying to me. Left, Right, Up, Down, Tags, and Attributes are all there on the toolbar, but none of them are in the actual Evernote interface. Why I would click up instead of just clicking the note I want is beyond me. Why more necessary buttons like All Notes and the “Currently Viewing” bar from the Windows client are gone is also confusing. I say if you’re going to make an interface for Evernote, make it familiar. Take lead from the web version or one of the actual clients, but don’t go halfway and then start throwing in random stuff that isn’t needed.

Secondly, I’m dying without thumbnail previews. I’d love to see those show up, although I have no idea if it’s possible for the devs. That would just be swell if it’s in the works or something.

Third, the search just… sucks. I would search for the names of my notes and nothing would show up. Why have a search if it doesn’t work properly?

However, I could see a certain little Zeitgeist finding a nice little home in Nevernote…

Lastly, Cueball from the OMG! Ubuntu Forums notes that “…the only real complaint I have is that Nevernote doesn’t play with AWM – in the sense that the running app creates a second icon in the taskbar rather than running from the launcher.” So AWN users, know that double icons are coming. Sorry.

The Sum Up and Installation

All in all, this is a great app. It’s pretty fantastic to get a decent experience of Evernote in linux without jumping through hoops in Wine. With  a few more feature buffs, this could be a really killer app.

I recommend using it in conjunction with some Evernote add ons for your browser, to aid in clipping and what not. Also, remember that anything that doesn’t quite work right in NeverNote, probably will in the web interface of Evernote, you just won’t get local sync.

So go give it a spin! Downloadable .debs (and also windows installers!) are available right here, but be sure to take a look at known problems first.

Thanks to Greenwhite, although I happened to find out about this program through other means. :D