So now that Benjamin has shared his desktop setup with all you guys, I figured I’d share mine as well. Luckily for those of you who get bored easy, I use some similar things as Benjamin at the moment, because sometimes simple is better, so I’ll skip over the stuff that overlaps a bit too much.

In a similar vein to Benjamin, I’ve been learning to love/happening to love default Ubuntu more with each release. I used to have massive conky setups, and I would change around many of the default bits of software. Now there are just a few must have, immediately do after a clean install modifications and changes before the desktop starts feeling like home again.

Just so that we’re all on the same page with this, as well, I use Ubuntu on my Dell Studio 1458 (14-in, core i3, 4 gbs of ram) connected to a 22″ monitor. Next to it, I have my older Dell Inspiron e1505 (Dual-Core, 2 gbs of ram) running Windows 7, as well as 2 additional partitions that I use for testing distro’s on a computer with much less power and a differing video card. Behind these, without a monitor, is a home server running Ubuntu 10.04 (I’m not upgrading this computer) which spits media out to all my devices. I also have an android phone and an iPad.

Basic changes on my desktop: 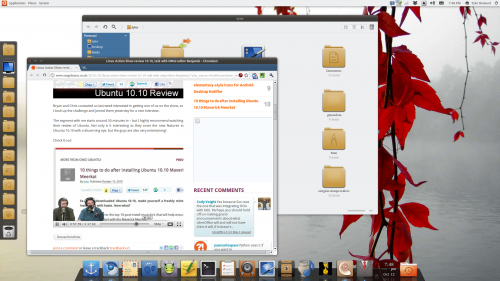 My favorite theme, ever. I’ve switched away from it a few times but I keep coming back. This theme is the theme I’ve always wanted, and now finally have. 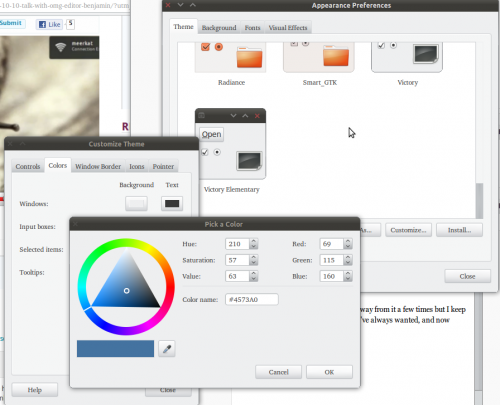 We’ve written in detail about Victory GTK’s goodies before, but I’ll share a thought or two. One of the coolest things about this theme is that you can set it up with multiple colors in, for instance, Nautilus. I throw it down with a nice strong blue for selected items and some nice grays so that things I’m not looking at aren’t distracting.

Partnered with that is the Faenza Icon set, which is just a really solid icon set, that we’ve covered plenty here before, and Benjamin told you some about as well, so I won’t go into it to much except to say: I like. 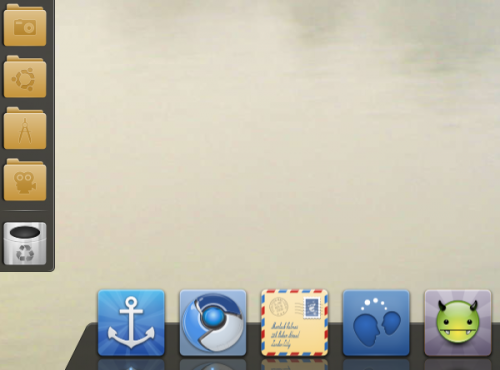 I like using a dock for one primary reason: it autohides and does it quickly, cleanly, and easily. I always have problems with gnome-panel’s autohide for whatever reason (not necessarily problems with gnome-panel itself; it just doesn’t do what I want). When I first started using Ubuntu, there was no Docky, so I alternated between Cairo-Dock and AWN, both of which were… weak, at the time. Both of those options have shaped up considerably in the meantime, but I was a convert to Docky since day 1. It’s just much easier for me to set up and use, and I rarely, if ever, have any issues.

As you probably noticed from that first screenshot, I’ve got two docks going on. On the left hand side, I’ve got one with the bookmarks docklet, the trash, and the mounter. On the bottom, I’ve got a bunch of launchers for various things, the clock, and recent documents.

Another important part of Window Management for me is my Compiz setup. Like Benjamin, I make heavy use of the Expo and Scale plugins, as well as Grid. However, being a frequent user of 4 workspaces, I have a slightly more effective setup for managing multiple workspaces. 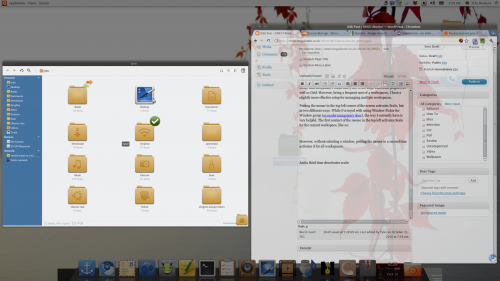 However, without selecting a window, putting the mouse in a second time activates it for all workspaces: 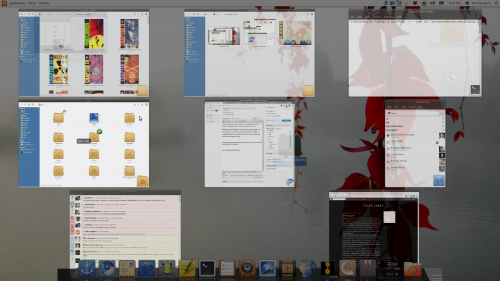 And a third time deactivates scale: 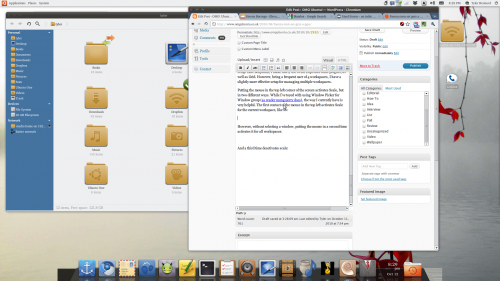 The really handy thing about this is that clicking any window simultaneously gives that window focus, but also brings you to that workspace. This means that with many windows open, that this is actually quicker than keyboard shortcuts for locating stuff. I’m a big fan, especially when I can’t exactly remember where I left that open terminal at.

In addition to this I use Expo in the bottom right (again, 4 workspaces), Show Desktop in the bottom left, and a Widget layer in the upper right (more or less unused, as I’ve quit Tomboy).

In addition to that whole mess of wordage, I also use the Grid plug in with keyboard shortcuts. This makes tiling windows very easy, as a Shift-Ctrl-Direction can send any window to cover that half of the screen. Pushing again changes it to 1/3, and so on and so forth. Very easy for putting reference documents and text entry side by side.

Get Tyler’s Compiz Profile (BACKUP YOUR OWN SETTINGS FIRST! I take none responsibilities for borked compiz’s!)  :

Apps I Can’t Live Without

Ok, Ok, I’m exaggerating. I could probably live without. But I always always install these apps.

I doubt there’s much to say that you haven’t heard about Chrome/Chromium already. It’s fast, it’s light, it’s a total delight. While I also make use of Firefox and Midori, Chrome is my go-to for speed and ease of browsing, as well as syncing my bookmarks to my Windows PC.

Still better than UbuntuOne, even though I wish UO could be my main cloud back up software. Dropbox is usually actually my first install, as I make use of it (and UbuntuOne, but to a lesser extent) to transfer most of my settings and profiles and stuff, just to be safe in case something terrible happens on a clean install. It usually does, in the sense that I forget about some random thing here or there. Thus, everything goes to the cloud before I start partitioning.

If you haven’t signed up for Dropbox, do it right not. Heck, use Benjamin’s referral link (you guys already maxxed out my account!) and you’ll both get extra space for free. It comes with free 2 gb’s and easy sign up for additional space, and it’ll guide you through the install process.

I’ve been planning to (and procrastinating) writing more in depth posts on using Samba to share files and such between computers. Several of you have written in asking for help with using Samba between Ubuntu computers, Windows XP, Vista, and 7. I apologize, I’ve started a new job and have all around just not had time to go into such a full length technical article. But I will. Eventually. :D

Brilliant software for those of you using more than one computer. Basically, my keyboard and mouse are physically connected to only one computer, but transfers (via network) to my other computer, where I can use it normally. Basically it’s like using dual monitors but one has Ubuntu and the other Windows, and on two different computers.

Install the quicksynergy client in the Software Center.

Hardly a productivity app, Comix is still something that I always install. Why? Because it’s a fantastic Comic Reader for linux.

And I love comics.

Install Comix from the Software Center.

Covered ad-infinitum here on OMG, so I’ll just say this. I have it. It’s great. Always has been. Fin.

Not really as big of a deal as the others, but I do change my fonts around. I’ve been trying out the new Ubuntu font, and while I like it as a font, I’m not sure how I feel about it as an actual system font. But I’m trying it anyway, currently in the place of the awesome Droid Android fonts that I love. Anyway, this is what I have: 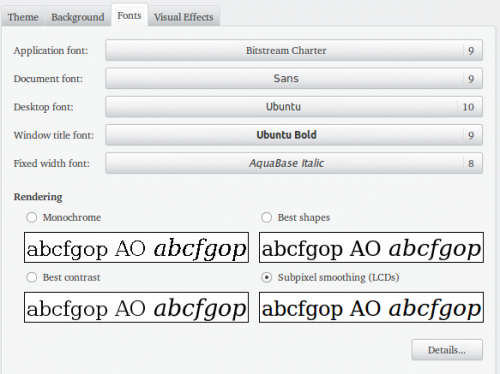 Guess what, Font snobs. I use a Serif Font as my Application font. I like it. Deal with it.

Well, I think that covers most of the important stuff. If there’s a little tidbit or small thing that you’ve seen in my screenshots here or on any other post and are wondering about what’s going on it it, and are wondering why I didn’t mention it here, it’s probably because I’m either A) testing it out for something, like maybe a post here, or B) I did it once because I was curious, but it’s not a necessary part of my workflow or usage of my computer, and I’m just to lazy to change it back. :D For instance, I just installed the Android Notifier that we covered a bit recently, because I just got an Android phone.

So, if you have any Android apps you want me to check out, and possibly review here… drop by my Twitter @tylerbrainerd or write an email on our Tips page and make sure you put Tyler and Android in the subject line, or I may miss it.

Oops! Forgot to mention something. As pertaining to my font choice: I have my terminal set to not use the system default fonts, and I have monospace/10 set within it. So I don’t use aqua base in the terminal, just in other cases of fixed width. Like gedit. :D

Ubuntu One Indicator Applet gets a PPA
Read Next