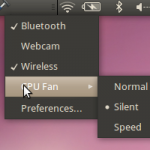 OMG! reader Mateusz Jagiełło was in that position as he searched out information on his chosen Samsung R580 laptop – that was until he discovered a thriving community of Samsung device users with it’s own dedicated PPA & application tool ready with the necessary fixes.

The tool in question deals with all of the usual ‘troublesome features’ hardware can cause under Linux – Bluetooth, Wifi, webcam, function keys, Sleep, Hibernation, control of the CPU fan and much more. More-so, it does not only for use with R580 models but for all Samsung netbooks and notebook machines.

“In addition to the Samsung Tools program, in the repository are also available kernels adapted to the specific models, drivers unsupported by default in Ubuntu (some Realtek chips) and an “emergency package ” to the screen’s backlight, which is used when the same Samsung-tools by itself fails to make it work properly.”

You’ll find the PPA nestled over @ launchpad.net/~Voria/archive/ppa and more information on the Voira forum.

Apps How To netbooks tips

Per-Annum Bayenhold Servers are proprietary in nature. Even if Canonical did give…
Don't Miss: Ubuntu 21.10 is Now Available to Download