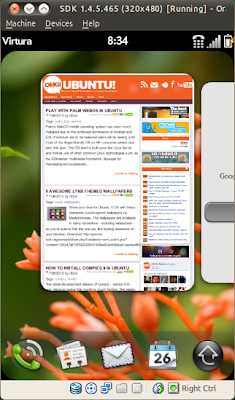 Palm’s WebOS mobile operating system has been much maligned due to the continued dominance of Android and iOS.

If rumours are to be believed users will be seeing a lot more of the finger-friendly OS on HP consumer tablets due later this year.

The OS itself is built upon the Linux kernel and makes use of other common Linux technologies such as the GStreamer multimedia framework, libpurple for messaging and pulseaudio for audio management.

The UI of WebOS is very different to that of its competitors, making use of a “card” metaphor for multitasking, and relying heavily on touch controls.

Trying webOS out in Ubuntu

The How To Geek posted an article on getting WebOS  up and running on Windows-based machines earlier today but the method for doing so on Ubuntu requires a little bit of extra effort.

You will need to install the following packages – some of which are several hundred MBs. If you already have some parts installed skip ahead a step: –

64 bit users will need to do the following extra steps: –

A shortcut to the WebOS Emulator should be in the Applications menu. If not press ‘Alt’ + ‘F2’ in unison and enter ‘palm-emulator’ or open Virtualbox from the Applications > System Tools and launch the SDK from there.

A window asking you to choose a resolution will pop up. 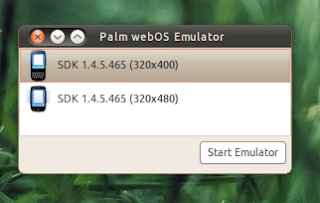 WebOS will then proceed to boot up until you arrive at the webOS home screen. From here you can open up the menu and play around with some applications. Not every application will work as intended due to no rotation, GPS, etc support.

You can use your mouse to launch, move and close applications but you will also need to use your keyboard to initiate other actions. Pressing the ‘end’ key will zoom out to the ‘card picker’ view where you can drag a card upwards with your mouse to close it or click ‘n drag to view another.

How To palm tips webos

Home » How To » [How To] Play With Palm WebOS in Ubuntu