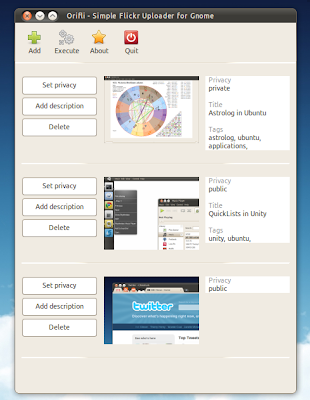 Looking for a simple, lightweight Flickr image uploader? Orifli by Original Coding might be just what you’re looking for.

If you’ve never heard of Orifli before now then there’s a simple reason – the Flickr-loving app is relatively new on the scene. A self described “simple programe” for uploading your photos, images and other graphical tid-bits to Flickr, Orifli succeeds in doing one thing and doing it well.

Orifli lets you add & upload multiple photos at once as well as providing the option to enter titles, descriptions, tags and set the privacy level for each photo.

Early days
I’m not going to be overly critical of an application that is a) as fresh-faced as Orifli or b) as useful. It would be nice to see drag and drop support for adding images turn up at somepoint. Having to click ‘add’ is a bit unintuitive when using a non-fullscreen application on a large desktop. The ‘execute’ option (i.e. ‘upload’) should probably be renamed for English speaking users so it sounds a little less 1995.