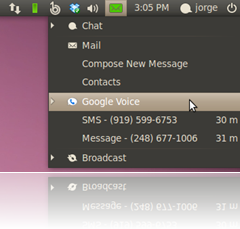 Users of Google Voice will be thrilled to learn that thanks to the work of Ken Van Dine you can now receive instant notifications of new voicemail, SMS’s and other Google Voice messages directly to your desktop via the Ubuntu messaging menu.

I’ve wanted to blog about this application for a little while now but having just read via the mighty Jorge Castro’s blog that it now has a PPA I could resist no longer!

Somewhat weirdly for me I’m enthusing about this application solely on the basis that it is a great idea made real. I don’t use Google Voice so I’m at a disadvantage in offering up a comprehensive – nay informed – review of the Gvoice-Nofitier but being such a massive fan of the Messaging Menu – and blogging routinely about applications that make use of it – I couldn’t help but point this out for users who do use.

Installation is made easy thanks to Ken Van Dine packaging it up in a PPA . Open a terminal (Applications > Accessories > Terminal ) and enter the following commands carefully in order to get the indicator installed and up-and-alerting.

Once installed you’ll find the notifier sat in your Messaging Menu just waiting to be configured.

Via | Jorge Castro (who I’ve also stolen the screeny from)

The feren OS Dev Yep. Still find it weird that they didn't decide to…
Here’s Your First Look at Microsoft Edge for Linux

OstroLk Thanks!
Here’s Your First Look at Microsoft Edge for Linux

OstroLk True, but when you add "no border" and "Use system…
Here’s Your First Look at Microsoft Edge for Linux