Formerly part of launcher application ‘Do’, Docky impressed right from the start with a professionally designed interface, attention to detail and usability and what it lacked in the superfluous bling of competitors it made up for in stability and ease of use.

Now a standalone application boasting an exciting development pace and many awesome ideas for its future, Docky remains one of the most popular dock choices for users. A combination of consistent design, applications helpers and fantastic docklets docky stands out a prime example of ‘do one thing and do it well’.

Docky has a refined and sensible set of configuration options allowing a user to, amongst other things: – 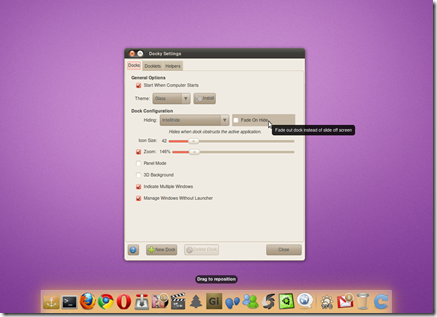 One of the ‘big names’ on this list is CairoDock. It’s been around for a long time [how long?]

Issues? If you’re looking for something simple that just looks good and works then AWN or Docky are likely better bets. CairoDock may out-pace those former two in terms of functionality and customization options, but its precisely is the detriment of CairoDock – too much choice!

‘The dock for control freaks and power users.’

The settings menu is exhaustive: – 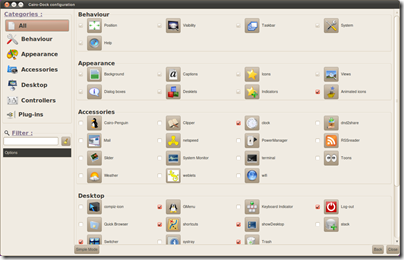 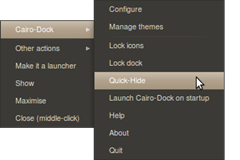 CairoDock, for all its faults, remains an impressive playground of exciting new ways to interact with window management. Innovative ‘dock modes’ stretch beyond the comfort of “2D or 3D” and add in carousels, awkward undulating rainbows and many more besides – well worth a poke around with if you’re bored!

The selection of extras is, as with CairoDock as a whole, extensive – everyone is bound to find something they like.

We very recently reviewed AWN 0.4 – the latest release – and, like many of you, were suitably impressed! Long gone are AWN’s jarring design options, irritating launcher quirks and focus on ‘wow – look at that’ over ‘can’t this just work?’. The total ground-up re-write of 0.4 has resulted in stability, better performance and overall has made AWN the dock to watch.

What’s it got going for it?

A Dock could have a million applets and shiny features but if it doesn’t do the job of managing windows well enough then its not worth the 2 mins it takes to install. Fortunately AWN does ‘the aim’ admirably. There are quirks here and there and given the code is still relatively fresh stability issues do crop up now and again.

SimDock does not require 3D acceleration to run so is a perfect match for netbook users or those with performance in mind, just don’t expect something worthy of a ‘best in show’ rosette…

The ‘basic’ approach of SimDock has a knock-on effect in terms of functionality. No super slick animations or graphically interesting docklets to add – SimDock is just a dock; managing open windows and launching programmes is what SimDock does. Does it do it well, though?

Issues to bear in mind

Aside from SimDock lacking a great deal of customization options users may want or need, there is no drag n’ drop arranging of launcher and, perhaps most annoyingly, the dock doesn’t allow application minimization from the dock; clicking on an open app icon will maximize it, but not reduce it.

SimDock, people, is not a dock for Grandma.

Adding launchers is also a relatively faff-tastic method with users having to manually enter application commands and locate icons. 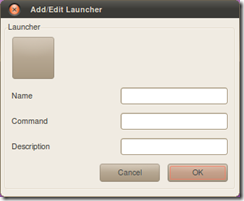 This dock isn’t one for Grandma or anyone looking to have an easy ride. SimDock is light and is efficient but in the wake of the ‘bigger’ boys and even GNOME panel improvements it just can’t compete.

KibaDock’s big selling point is its physics engine. This allows for some crazily impressive (and not entirely helpful!) animations.

Other than the “cool” factor KibaDock remains one of the ‘minor’ players. It’s worth checking out all the same.

Technically a panel applet rather than a Dock, DockBar (and the experimental off-short DockBarX) aim to replicate the ‘icon only’ Windows 7 task bar. It has basic animation support upon hover over, multiple windows and more.

It does, of course, lack much of the feature set a dedicated dock application comes with. DockBar is simply a slightly more stylish ‘button switcher’ applet but for users not seeking twirly, sparkly bling or installation of a dedicated application DockBarX is a solid choice.

Similar in more ways than one to DockBar/DockBarX Talika offers much of the same functionality, icon based manipulation and is also a GNOME Panel Applet rather than a fully fledged standalone application.

One feature Talika has over its brother DockBar are support for Window previews a la Windows 7. This makes Talika the perfect window management solution for those migrating from the land of Balmer. You’ve seen the candidates so now it’s up to you to decide which dock is the dock. Poll is open for a week so get voting!

Home » Poll » You choose the best Dock for Ubuntu [Poll]