The usual story given to a user who asks “is 64bit Ubuntu is worth it?” on the Ubuntu Forums  is a muddle of “not really…”, “not that much faster…”, “if what you got works, stay with it…” etc. 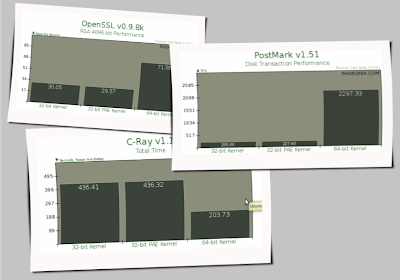 Many people are recommended to use the Ubuntu PAE kernel with 32bit Ubuntu allowing them to address more than the heady heights of 3GB RAM 32bit usually allows.

Well, kiss those presumptions goodbye because kernel-loving website Phoronix decided to run some tests to see how the normal Ubuntu kernel, the PAE kernel and the 64bit kernel stacked up against one-another. Their results were pretty conclusive – Ubuntu 64bit is incredibly faster than Ubuntu 32bit – even with PAE enabled.

In their test conclusion they state: –

“By far though exhibiting the best performance was the Ubuntu 64-bit kernel that often ended up being leaps and bounds better than the 32-bit kernel. Unless you have technical or business reasons for not migrating to 64-bit Linux with compatible hardware, there is no reason to stick around with a 32-bit kernel…”

You can read the full analysis over @ Phoronix