Ubuntu are once again aiming to bring the social web to users desktops in the forthcoming 10.04 Lucid Lynx release. 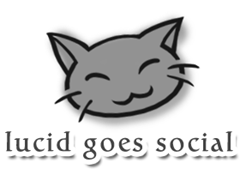 The “social from the start” initiative was originally intended to kick-off with Karmic but for various reasons it was postponed until 10.04, not least of which micro-blogging application Gwibber not quite being polished enough on time. (?)

The ‘Social from the start’ plan is not simply just about having twitter and facebook applications installed by default, but rather how to leverage and integrate these with the desktop and the users workflow.

“Why would you want to do this?” Well, why wouldn’t you?

Social networking is without-a-doubt one of the most integral and important societal aspects to have emerged from the creation of the internet.

It’s not just about seeing what Marvin ate for lunch or poking Tamara, either. People keep in touch, share moments and memories, find news, trade experiences and interact with services. Twitter and Identi.ca have helped businesses and projects communicate more efficiently between departments and employees – Facebook campaigns have lead to wonderful charitable campaigns, political changes and even to help try and solve murders!

Currently users have to launch a browser or download an application in order to interact with their social networks.

Web-based OSes such as Moblin and JoliCloud already utilize social aspects within their respective “desktop” models; The Jolicloud OS is in many respects a social network itself – Jolicloud users can follow each other, recommend applications to install, etc.

Ubuntu, as an OS for “human beings”, is therefore totally right to start integrated a large aspects of people’s lives and time spent on a computer within the OS. By allowing users to snap into their social cliques from the get-go, time is saved, updates and information can be consumed effortlessly in so-called real time and users will find that their desktop suddenly feels less like a tool and more like home.

A number of changes will (if all goes well) land themselves in Lucid. Not everything listed below is guaranteed to make it and some parts may morph or evolve between now and April 2010, but the gist of the plan is certainly able to be gleaned and shows that the relatively narrow, un-intrusive scope the project had in Karmic has been widen – and for the better!

Gwibber will see a stack of fixes and simplifications in time for Lucids’ release. First and foremost is creating an ability for external applications to access and getting Gwibber to work nicely with DesktopCouch/CouchDB to allow for some pretty awesome social-linked features in other applications.

A new ‘account’ interface/configuration panel is currently in the works, as is making Facebook authorization less arcane. Gwibbers’ presence within the messaging applet will be assured by showing more informative data from streams within it.

There are plenty more changes mooted for Gwibber in Lucid: –