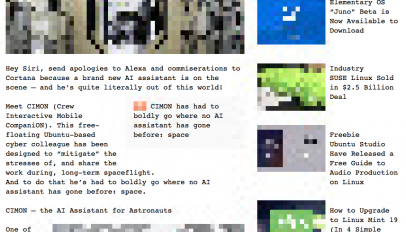 I woke up today to find my Twitter feed chok full of praise for something called Browsh. It’s a brand new, modern text-based web browser built for the command line. Yes, I did just say a text […]

Introducing: The best Ubuntu yet? Since its release a month ago I have been testing Ubuntu 10.04, Lucid Lynx, and I have been pleasantly surprised by the improvements in this version of my favorite distribution […]

Buy a Limited edition lynx toy from Ubuntu & help Save real Lynx’s, too!

Users buying the new limited edition Lynx toy from the Canonical store will also be helping to save real Lynx’s in the process. Ubuntu’s parent company Canonical are donating a portion of each Lynx toy […]

Ubuntu are once again aiming to bring the social web to users desktops in the forthcoming 10.04 Lucid Lynx release. The “social from the start” initiative was originally intended to kick-off with Karmic but for […]

The name of Ubuntu 10.04, the release due in April 2010, has been revealed as ‘Lucid Lynx’! Lynx’s Meat Lucid Lynx will be a LTS release (supported for 5 years) and will ship with Gnome […]