The developers of web browser Opera recently announced plans to free their widget platform from the browser and let them run on the desktop. Users need no-longer have Opera running in order to use Opera Widgets. 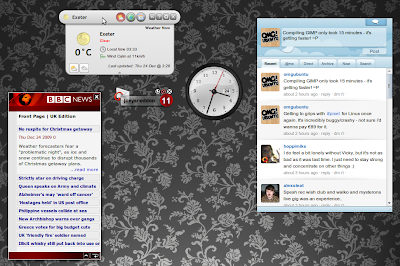 "…as long as you have Opera installed, you can run any widget you like, without ever opening the browser." ~ Remigiusz Bondarowic, Opera

Opera widgets are also cross-platform allowing developers to focus on creating great widgets and not on porting and adapting them for various desktops.

The State Of Widgets
So where will the Opera Desktop Widgets sit within the Widget eco-system?

Gdesklets is the oldest out of the current options and perhaps the least elegant. The majority of ‘desklets’ available are either out-dated or don’t work properly. The last stable release of GDesklets was over 4 years ago.

Screenlets are perhaps the best known "widgets" for Linux. There are a ton of  useful "screenlets" out there, with plenty still being created. 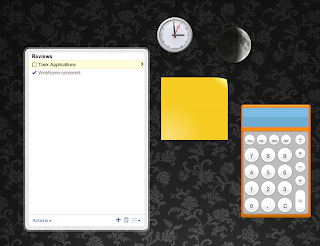 The development of the Screenlet framework itself is less secure. The last release was well over a year ago, the project forked and re-named itself "Universal Applets" but this, too, seems to have stalled in development.

A popular if much maligned choice for desktop widgets is Google offering – Google Desktop Widgets.

There are a multitude of well designed and useful applications available for it, most of which run on the Linux version flawlessly. Sadly, as with the other options, development on Google Desktop Gadgets has quietened down with no stable release on the horizon.

Firstly, kudos to Opera for calling widgets ‘widgets’! Gadgets, Desklets, Screenlets, etc may sound cool, but when we think about what they are we think "widgets".

Widgets can be downloaded in any browser as the .wgt file extension will call Opera’s widget runtime to take care of the installation and, via the Widget manager, can be packaged up into .deb’s.

Opera Widget Manager
Widgets are ‘managed’ using the Widget Manager. The entry for this sits in the Applications > Accessories sub-menu. 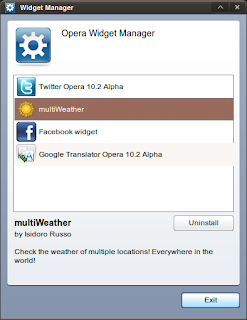 ‘Manage’ is a bit of a stretch when describing it in the current Alpha version, given the only option you have is ‘uninstall’. One would assume some configuration action will, at some point, end up in here.

Widgets
The widgets themselves sit inside an folder named "other" – along with all the other applications Ubuntu doesn’t quite know where to shove. It wouldn’t be much to ask for the widgets to land in their own ‘Opera Widgets’ folder, would it? 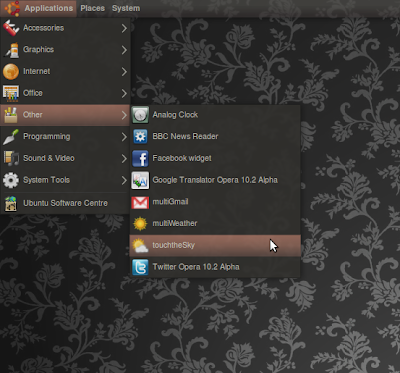 Two demo widgets are provided by Opera that take advantage of the newly un-caged framework. These are a Twitter client and a Google Translator.

UI
Widgets come with their own styles, borders and window dressing, but all have a little control toolstrip that sits in the top right corner. This does fade when unfocused. 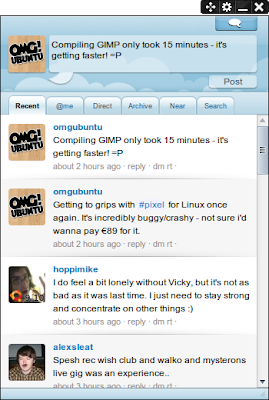 Widgets can also "dress up" in native system window decorations. 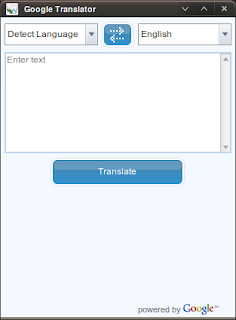 "Normal" Opera Widgets also work the framework, though without being optimized UI wise there can be some annoying visual quirks.

Opera Desktop Widgets are currently in Alpha so don’t expect a wonderfully stable walk in the park. That said there is very little chance of screwing up your system by install it to try out.

The Opera Desktop Widget package is available in a handy .deb file. For total GTK integration download the QT4 version.