This post is a few months old. A newer version reviewing even more IM clients can be found by clicking this link.

What is the best IM (Instant Messaging) Client for Ubuntu? Let’s find out!

Pidgin is the default messaging client for Ubuntu and comes pre-installed.

One of Pidgins strongest selling points is its support for a multitude of various different IM protocols – a selection of which are: MSN, Yahoo, AIM, Gtalk and even IRC! Uniquely, with Pidgin you can log in to multiple accounts simultaneously. This means that you can be chatting with friends on AIM, flirting with contacts on Yahoo! – all whilst nattering away to your MSN buddies – all at the same time.

‘Simple’ and ‘Clean’ are two words i would use to describe Pidgin’s interface. It blends seamlessly with Gnome and GTK themes and it’s minimal look is appealing in light of of many other IM Clients that shovel every possible button into their already crowded interfaces.

The ‘main’ window is a simple affair, displaying your online contacts, their status and display picture. You can set your display picture and status via the panel at the bottom.

One thing I don’t like about Pidgin is that there is no obvious way to set your ‘nickname’. Sifting through menu after menu you’ll find it’s tucked away in ‘Account Settings’. Whilst not a deal breaker, it’s a bug bear nonetheless.

Although Pidgin boasts many of the ‘basic’ IM functionality you would expect, it does lack in places. For example Pidgin doesn’t support Webcam sending or recieving, file sending over selected protocols (such as MSN) or voice chat. Given it has to support a lot of different platforms this is understandable but still a minus given other multi-protocol IM clients do.

Pidgin does support plug-ins however, which helps greatly add ot it’s feature set with all manner of superfluous additions such as ‘psychic notification’, ‘conversation logger’ and ‘window tremble’.

Installation: Pidgin comes pre-installed in Ubuntu, but you can always find it in Add/Remove if you’ve since un-installed it.

The Good: Supports multi-protocol chatting at the same time! Nice!
The Bad: Although it’s interface looks simple, trying to find options for basic features is long-winded and menu-filled.

Billed as a MSN Messenger “clone”, anyone used to Microsoft’s proprietary messenger will feel right at home!

Although only supporting the MSN network – meaning you need a Microsoft Passport account – it packs in the features thick and fast!

aMSN also has a plug-in framework allowing you to add spell checkers, nudges, winks and buddy pounces amongst others.

The biggest issue with aMSN is it’s interface. It’s cluttered, not very well designed and just ugly. It doesn’t integrate very nicely in a Gnome desktop, either.

Installation: Find it in Add/Remove with ‘amsn’.

Galaxium is a new multi-protocol messenger that right from the get go looks very, very swish! It’s still currently in development, but is stable enough to use daily.

Okay, down the good stuff: What features does it bring to the table? All the usual stuff like contact list management, display picture, custom statuses, nicknames etc, but also: –

Galaxium really sits heads above the other clients in this list because not only does it have a great feature set, it is immaculately designed. 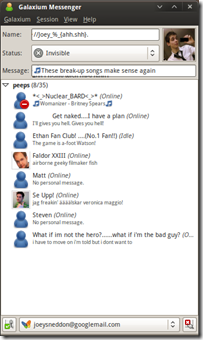 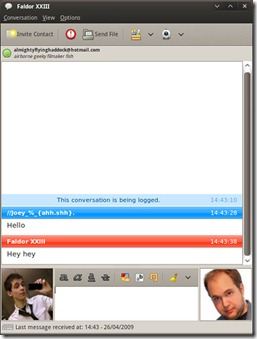 The support for Adium themes is great for customising it’s look to something both well designed and usable.

Installation:
Download the .deb for your Ubuntu version from the PPA below.

Be sure to also add the PPA to your system sources to stay up-to-date!

Emesene 1.5 is a more recent and up-to-date community supported version of Emesene (the official Ubuntu repo version is frozen at version 1.0).

The interface is clean and elegant and very intuitive. If you’re used to Live Messenger/MSN in Windows and want the closest thing to it on Ubuntu ” Emesene 1.5 is for you!

You can add more features to Emesene thanks to its selection of plug-ins! Enable winks, window trembling, ‘now playing’ status and a ton more. You’ll find them all in Options > Plugins.

Empathy is the default messaging client for Gnome. Evidently still in the early stages of existence; it resembles a very basic Pidgin. 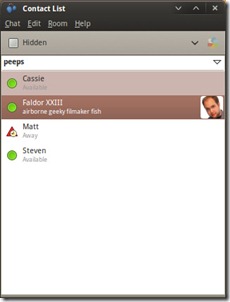 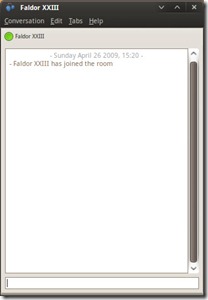 Currently supports all the protocols that Pidgin does, but has barely any of it’s own features to talk about unless you count being able to IM as one!

Installation: Find it in Add/Remove

The Good: Great if you want something simple, light and basic.
The Bad: Not able to select a display picture; can’t send files; basic