The oncoming release of Jaunty will also see the first release of an official netbook version of Ubuntu – namely the Ubuntu Netbook Remix.

Whilst the interface has been floating about for a while and is easily installed on a stock Ubutnu install (or with third party distributions such as Easy Peasy of Eeebuntu), this release will be available directly from the Ubuntu website.

Wondering what to expect? Well you can grab an alpha release of it over at the Ubuntu.org site, but if you’ve used any netbook remix interfaced distro before it’s pretty much the same! 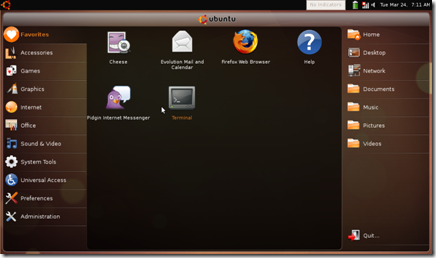 A few bugs have been ironed out the interface, and the netbook specific distro as a whole will support most current netbook hardware right out the box! Yay! It will also come with applications more suited to work on a netbook.

The downside of this official version are a number of “issues” in the alpha release font sizes are not set correctly, the app launchers are set to open on one click which is very, very irritating if you have a small trackpad that picks up the slightest of misplaced touches. Enabling Compiz will also render the whole netbook interface useless – the top panel will disappear, the app launches will disappear and.. yeh – not advised! (Why you’d need Compiz with the netbook remix i don’t know)

Once these issues are sorted out and solved this Netbook version of Jaunty will help deliver the speed, optimum performance and other benefits to netbook users everywhere!