Netbook’s are funny little machines. Powerful enough to be awesome mobile devices but underpowered and not suited to support most ‘Operating Systems’ fully.

Windows Vista is an excellent example of an OS coupled with Netbook’s but whose Hardware really isn’t up to the burden of trying to run it.

Linux ‘Lite’ OS’s were the first OS’s partnered with Netbook’s. Most notably is the EeePC’s Xandros ‘Easy Mode’ interface. When the ‘Netbook boom’, err, exploded, a variety of other Linux Distro’s were rolled out in ‘easy mode’ styles such as the Acer Aspire One’s  Linpus Lite.

Windows XP was also a popular OS for Netbook’s mainly due to it’s less resource intensive appetite, but it too isn’t the best suited OS for Netbook’s due to the sheer amount of bloat any windows distro comes with which is simply wasted on Netbook’s.

What is the best OS for a Netbook?

I’ve tried quite a few out since I got my EEE almost a year ago so I’ll share my tips and views.

First thing to be aware of is that my Netbook has a Intel Celeron 900mhz Processor (comparative in speed to the 1.6Ghz Atom, however), 2GB RAM and a 4GB SSD. Anyone with a more recent Netbook will likely have less RAM but more HD space and a bigger screen. 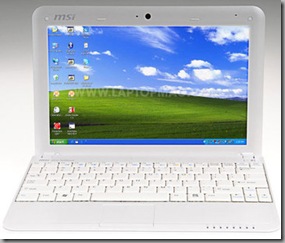 A Netbook isn’t meant to be a laptop replacement so if you’re choosing XP purely because you want to run ‘Microsoft Office’, ‘Photoshop’ or other ‘windows only’ applications, ask yourself why you’re not spending a few hundred pounds/dollars more to get an actual laptop that can cope with running them.

Most applications people need on a Netbook are Office Software, IM & browser, media players and, err, that’s it really! These can all be found on Linux and actually run better on Linux because Linux is a more optimized Operating System and thus requires less resources to do the same tasks.

(My tutorial on tweaking XP for Netbook’s)

That out of the way, is XP a good solution? It depends how Linux-Phobic you are and how “necessary” Internet Explorer, MSN, Malware, Viruses… are to you. IN all, XP isn’t an ideal Netbook OS at all – it’s just too frivolous and loaded with features that you don’t need taking up precious resources. If you want to have a slower than slow Netbook just so you can show off you have XP go for it, but if you want a Netbook to be actually useful, I’d say try Linux.

You will likely have to install drivers to get your Netbook Windows friendly. This is no different than having to install packages in Linux, so don’t fear Linux because you have to install stuff. In fact a lot of Netbook Hardware is supported right away in Linux requiring no effort!

If you’re using a netbook for work or a Windows Only Application is essential then why not try it in Linux under WINE? A ton of windows programmes and applications run fine under Linux including Photoshop (but on a Netbook? Seriouz?), Internet Explorer, Microsoft Office etc. However there are Linux alternatives that do exactly the same job and many Windows app’s have Linux versions such as Skype, Google Earth, Picasa, Adobe Air, VLC, Firefox, Flock, Songbird.. need i go on!

If you want a similar ‘xandros easy mode’ front end to Windows XP you can easily install this application. 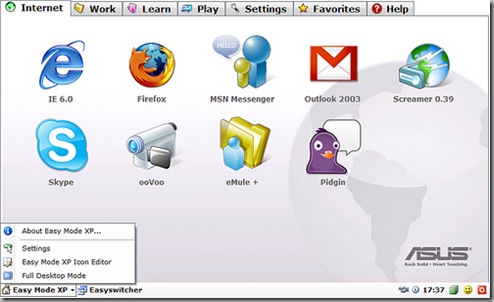 I wouldn’t recommend Vista for a Netbook at all. Certain manufacturers have other ideas, though! Vista will run on Netbooks, but you’ll take a performance hit. The best bet for anyone stuck with Vista on a netbook is to install Windows Vista ‘Origami’ Pack – an ingenious (and lush) ‘easy mode’ like interface for accessing music, media, and other apps. 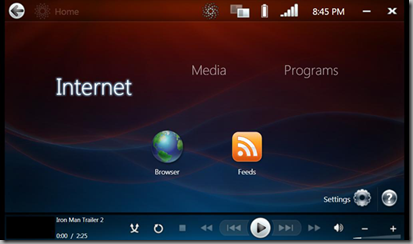 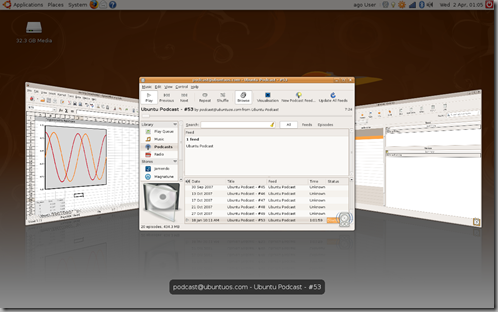 A dichotomy presents itself here. Whilst pretty much every other ‘Linux’ distro out there will work with your Netbook out of the box, requiring no effort, depending on which release of Ubuntu you choose (8.04, 8.10 etc) will affect the amount of ‘effort’ you’ll have to put in to get every piece of hardware working. The best bet is to skip the ‘Full’ Ubuntu and install a Netbook friendly version such as EeeBuntu (see below).

The main issues on most Netbook is getting WIFI working and this has been greatly improved in Intrepid Ibex, so much so that it should just work! I found that 8.10 (Ibex) on my Eee 701 was more effort than necessary. The wifi, Ethernet, screen resolution, function keys etc etc didn’t work “out of the box”. After resetting xorg.conf, having to manually transfer packages from my desktop to my Eee via a USB drive, it did work. Why it didn’t work out of the box I’ve no idea.

It’s worth installing the ‘EeePC’ package from the repo’s (if you’re using an Eee of course!) as this will give you over clocking functions, enable/disable the camera/wifi/fan/etc from within Ubuntu itself and a few other tweaks. Adjusting the Screen Res to 1024×800 certainly helps, too. A similar application called ‘Eee-Control’ for Linux can be downloaded here.

A Full install of Ubuntu is great if you want a mobile ‘desktop’ environment (including compiz etc which all work find on the Intel GMA950 chipset found in pretty much every Netbook). A better ‘Netbook’ solution is to install EeeBuntu (Works with most Netbook’s, not just eee’s) which comes with the ‘Netbook Remix’ interface found in Dell’s Inspiron Mini’s.

Install the Netbook Remix version of Ubuntu on your Netbook and you’ll find pretty much everything works straight away! w0ot!

The ‘Netbook Remix’ version of Ubuntu is specifically designed for Netbook’s, mainly to cater for easy ‘on the move’ access to essential applications and to maximize productivity on smaller screens.

This is a tricky one. Xandros comes preinstalled on Linux Netbook’s and can seem daunting at first. Especially as it boots up in less than 20 seconds!

The “Easy mode” does exactly what it needs to bar allowing you to install more applications or sex up the picker panels.

These can easily be over come with a few tricks, however and you can find my ‘Xandros TWEAK Tutorial’ here. (Will Be Posted Later)

In some respects the Ubuntu Netbook Remix is just a flashy implementation of a ‘Xandros-esque’ Easy mode.

Xandros, being debian based, can run pretty much every programme and application Ubuntu can including WINE. As such, after tweaking it above, you can run everything you need! OpenOffice, Songbird etc!

Expanding to a full desktop will give you the same functionality but allow you to utilize having a desktop. Wow.

For any nerds out there bored of Linuxes and windows, install OpenSolaris on a Netbook can be a great way to get to grips with Sun’s Open Source OS. Like Linux, it supports a lot of the hardware out of the box. Given Solaris’ niché market there aren’t quite as many “familiar” applications for it. That said, there are Solaris versions of Firefox, Pidgin, Rhythmbox, Songbird, Open Office etc so all the “essential” functionality is there right away! 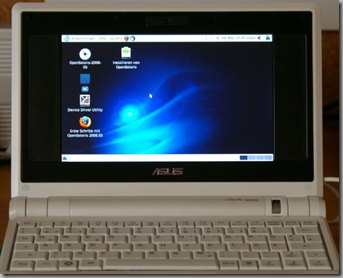 A Solaris port of the Netbook remix shouldn’t be too far away either.

Some Netbooks – the MSi WIND/ADvent 4211/Medion Akoya Mini in particular – can run Mac OS X with a minimum of fuss! The most you’ll have to do to get full functionality is likely swap the Wifi card out for a Mac Compatible one – costing around $10. 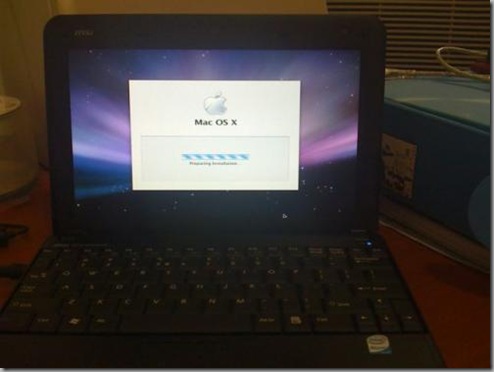 OS X runs fine on supported Netbook’s. Google is your friend if you’re interested in pursuing this, but for not the only “issues” with it so far (and some have work arounds that just involve installing a few tweaktastic apps) are:

Which isn’t too shabby!

In all, the best netbook OS is the one that suits you. I find that Ubuntu Netbook Remix is the best for smaller screens (7”), a full “desktop Install” of a Linux for the 8.9” – 10” screens.

If you like getting the best performance then go with a Linux, but if you’re just a Linuxphobe then you only have one choice anyway so not quite sure why you’d be reading this!

I didn’t review other “Netbook” friendly distro’s such as eeedora (A fork of Fedora for Netbook’s) and other’s. It’s worth googling and reading some more in-depth reviews before you take the plunge.

Home » News » What Is The Best Netbook Operating System

Silverlight For Linux
Read Next