Tired of the standard GNOME Terminal but cool on its successor Console? You’ll definitely want to check in with Black Box.

Black Box is a new GTK4 terminal emulator built in Vala and GTK4. The debutant release on Flathub has all of the core features you’d expect, plus a large dose of ones you might not. Yes, this app has a few innovative UI approaches that make it stand out from the (many) terminal apps already available for Linux desktops.

I do think of Black Box as the “eye candy terminal”. It may sound like contradiction given that CLIs are usually focused on raw function (and it may sound like a negative, but it’s not; things are allowed to look nice).

Thing is, Black Box isn’t afraid to be ‘beautiful’, as its immersive ‘headerbar-less’ mode proves. When enabled this gives every inch of the console’s canvas over to whatever command is running. Window controls only appear on mouse over:

The way window controls — which also includes a toggle to get the headerbar back, phew — “float” in to view when needed is similar to the way Clapper video player behaves. The result looks very pretty, especially when running a width-spanning command-line tool like btop, pictured above, or mapscii.

Now, I don’t think power-users will find this immersive mode efficient. But it has a charm to it. It’s novel. It’s new. It’s experimental.

Continuing with the “aesthetic” angle, BlackBox also includes 12 built-in themes. These can, optionally, affect the whole of the interface and not just the styling of terminal output. TO get a taste for it, Ubuntu users should enable the ‘Yaru’ theme in Black Box’s preferences — it’s a subtle but highly effective customisation feature.

A few other observable things: BlackBox defaults to a larger font size by default. This makes some CLI apps, like duf, look a little “zoomed in” compared to other VTEs:

Another of BlackBox’s visual “licks” is evident from the off: embedded tabs in the header bar itself. This effects a very slick, very modern look. Are there usability drawbacks to this? Yes, like attempting to move the window but instead tearing a tab out. Also, tabs would be more useful titularly differentiated so you know which tab is what.

But, again, BlackBox isn’t about doing what every other terminal emulator out there does. It’s trying new things. It’s experimenting…

‘Experimental’ is a word to keep in mind when trying this app as the “core” of it is described a WIP. Indeed, During my play with Black Box on Fedora 36 and Ubuntu 22.04 LTS the Flatpak build locked up multiple times, necessitating a force quit in all cases.

Until the stability quirks are ironed out I won’t be making Blackbox my default VTE, but I’ll be keeping my eye on it keenly all the same. An “eye candy” terminal? I’m down for that.

BlackBox is free, open source software. You can install the latest version of Black Box from Flathub, or grab the source code from Gitlab.

In summary, Black Box is a promising alternative to traditional terminal apps. Creative choices within the UI and feature set help it carve a space somewhere between power-user faves like Tilix and more general VTEs catering to casual CLI usage, like GNOME’s new Console. 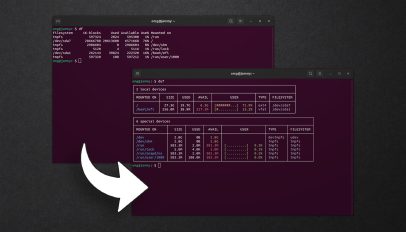 Terminal Tip: ‘duf’ is Prettier Alternative to the ‘df’ Command
Read Next