A time-saving window management feature from the Unity-era could find its way back on to the modern Ubuntu desktop.

An omg! reader pointed me to a merge proposal presently pending against Dash to Dock — for those unawares the Ubuntu Dock is a re-named fork of Dash to Dock. Ubuntu developers are pretty much the core contributors to the extension these-days.

What does it do that’s so special?

Well, it makes it — IMO — much easier to switch between multiple windows of the same app.

Below is an animated gif that shows you how multi-window app switching works out-of-the-box on the Ubuntu Dock at present (which in case you can’t see the gif is: a thumbnail picker in a pop-over spawns from the dock icon and you select a window by squinting at the screen and hoping it’s the right one):

It’s a decent approach for this window management use case, truth be told. It’s most certainly the ‘sane default that Ubuntu, as a distro, strives to offer. It’s also in keeping with the way Windows 10 and 11 behave (which, preferences aside, is the majority of touch point for comparison).

The patch proposal this article is (breathlessly) concerned with resurrects (more technically: reimplements) the ‘Unity’ method. This triggers an application-specific window spread when you click on a dock icon for which multiple windows are open, like so:

Me? I’d enable this option and profit majorly. Not only does it reduce the friction when moving between multiple windows spawned from the same dock icon, but it’s in-keeping with the way GNOME Shell works: it’s the window picker, just app-specific.

Also: my eye-sight isn’t great and seeing larger on-screen previews compared to the thumbanil-y sized ones of the stock approach is more helpful.

Do keep in mind that the merge proposal adding the window spread is being proposed as an option, something users opt-in to using. The discussion is not about making this method the default. Users who don’t want this UX would be untroubled by its inclusion as they’d simply never select it.

But I like options — heck, it’s part of why I use Linux — so I’d love to see this experience added in to the dock.

Alas, the original code was proposed in 2020, though it has been updated and rebased several times since then, the latest revision ensuring it works with Ubuntu in 2022. Ubuntu’s Marco Trevisan says he would like to “get this in by 24.10” which is encouraging, though October 2024 is a bit of a way off!

Home » News » Dev Ports Popular Unity-Era Feature to Ubuntu Dock – But Will It Be Merged? 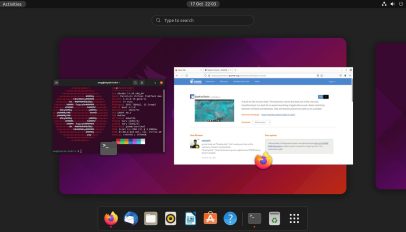