A new month, a new release of Mozilla Firefox — though as we’ve come to expect from its expedited release schedule, the changes are relatively minor.

What’s new? Well, a lots of folks, including Mozilla are hyped about Firefox 99’s support for GTK overlay scrollbars. These slimmer page sliders hide when not in use but appear on scroll and increase in size when you interact with them.

Thing is they aren’t enabled by default in the stable version, just the beta and nightly builds. So to enjoy GTK overlay scrollbars in Firefox 99 on your system you need to dive into the browser’s about:config page and set the widget.gtk.overlay-scrollbars.enabled setting to true:

Elsewhere you get to toggle narrate in Firefox’s ReaderMore using the shortcut n; you can search with or without diacritics in the browser’s built-in PDF viewer; and take advantage of the new Web Midi API (though it’s not quite as robust as other browser’s implementation).

Mozilla also say that the Linux sandbox is strengthen in Firefox 99 as “processes exposed to web content no longer have access to the X Window system (X11).”

Which is nice, right?

You can get Firefox 99 from the Mozilla website. The Linux version is provided as a standalone binary (i.e. you don’t install it, just run it from a directory).

But remember: if you use Ubuntu or Linux Mint you don’t need to do anything to get this update as Firefox 99 will arrive as a regular software update in the coming days, either via the regular repo or via the Snap Store, depending on which you use. 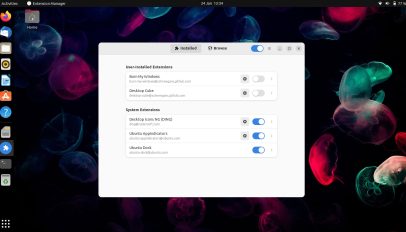