Do you think the official Spotify for Linux client would look better with a major restyle? So did the devs behind customisation tool Spicetify, which can do just that.

I last showcased a “hacky” way to use custom Spotify skins back in 2016 using the Spotio project. That effort is long dormant but several similarly-minded methods have emerged in the years since, enabled by comprehensive CLI tool Spicetify (via Diolinux).

Now, I’ve put “hacky” in quotes there as while these efforts aren’t “one click” solutions that most users will feel comfortable applying, they’re not exactly difficult or exotic to achieve, either. It’s also not exclusive to Linux; you can use the exact same themes on Windows and macOS systems too.

Things you can do with Spicetify:

For me, I just wanted a new theme.

And if you’re content to run command line scripts you find online (which you shouldn’t, but hey: I do once I give them a quick read over) you get to choose from a wide range of community-made Spotify themes using Spicetify, including the most famous: Dribbblish (see the hero shot).

It took me less than 5 minutes (and a quick wallpaper change) to go from a Spotify that looks like this:

I think it looks pretty awesome! 😅

Admittedly this effort did require copy/pasting a bunch of commands from my chosen’s theme’s ReadMe doc. But looking at the result: it is well worth the (minor) effort. Provided that you run all of the documented commands in order and use some common sense when applying them (like checking you’re in the right directly), it’s easy enough.

The sidebar in this theme I collapsable. Here’s what it looks like extended:

Also, the Dribbblish theme has a bunch of sub-variants (called modes) too:

And if Dribbblish isn’t to your tastes all don’t worry: there are plenty of other Spicetify Spotify themes to choose from, including these:

Note: to use Spicetify you should have the latest official Spotify for Linux release installed from the Spotify repo, Flatpak, or a community repo like the AUR. While you can probably use Spicetify with the Spotify Snap version it’s arguably more effort than it’s worth given the availability of other versions (and not something I’ve tried).

Now, I’m not going to walk you though all of the steps needed since the Spicetify docs do an exceptional job of that already. I will run-through the basics of getting the tool installed and set up on Ubuntu using the repo version of Spotify.

First, run the script to download and install Spicetify:

Next, you need to give Spicetify (and the world in general) permission to fondle your Spotify install:

Once that’s done cd into the Spicetify folder (assuming you ran the first command from your home directly):

And run (install git first if you haven’t):

And copy them over to where they need to be:

You can preview the available themes (and make a note of their names, which are case-sensitive) and apply one like so:

Some themes, including the ‘dribbblish’ theme I made use of, require you to run additional steps. These are listed in the theme’s ReadMe.md file and are relatively straightforward (just copy/paste commands).

That’s pretty much it in terms of themes, but do check out all of what Spicetify is capable of.

Home » How To » Spotify Fans Need to Check Out Spicetify 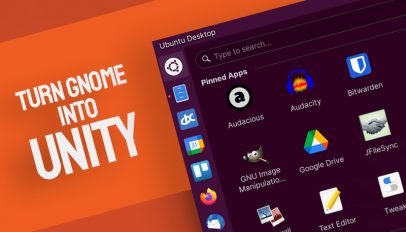 How to Make GNOME Shell Look Like Unity (‘Cos Why Not?!)
Read Next