To help prepare for the imminent arrival of Ubuntu 21.10 ‘Impish Indri’ I’ve put together a short video to showcase the release’s most impressive changes!

Six months of dedicated development went into creating Ubuntu 21.10, which is backed by 9 months of security and core app updates. This release also acts as a gateway to next year’s long-term support (LTS) release.

And by jove is there plenty to see!

While the arrival of GNOME 40 and its rejigged desktop is a rather big deal on its own, I imagine the imposition of a Firefox Snap app as default will inspire the most discussion. Ubuntu 21.10 isn’t just lighter to look at (spoiler) but it feels lighter in use too — I’m not running the distro on top-tier hardware.

But for me what makes this release most appealing isn’t a specific one-thing, it’s the aggregate total; the combination of new apps, new kernel, new GNOME Shell, new look, and new installer (though not default for now) make the Impish Indri a particularly inspiring iteration of this iconic distro.

Okay, that’s enough alliteration for one post 😉. Hit play on the video in the hero area to imbibe (sorry, last one) the essentials (if you’re reading from a feed reader or a scraper site you can watch our Ubuntu 21.10 video on YouTube directly).

Do let me know what you think of the video (and this release in general) down in the comments. Don’t forget to subscribe to our YouTube channel too — every sub and thumbs up is deeply appreciated! 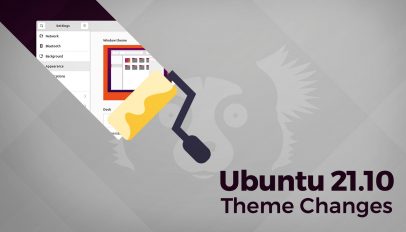 Quick Look at Yaru Theme Changes in Ubuntu 21.10
Read Next