Ubuntu 21.10 comes crammed with six months worth of changes including the GNOME 40 desktop, a new GTK theme, a Firefox Snap app by default, PulseAudio 15, and Linux 5.13 to name but a few.

This release — the 35th Ubuntu release for those keeping count — is backed by 9 months of security updates, critical fixes, and select software updates. If you install 21.10 (or upgrade to it from Ubuntu 21.04) you can upgrade to Ubuntu 22.04 LTS next April — a release supported for at least five years.

If you’re a regular reader of this site you should have a pretty good idea of Ubuntu 21.10’s core change set.

But if you don’t, read on for a concise overview of what’s new and notable in this release. Alternatively, skip straight to the download section to grab a freshly-spun .iso for first-hand testing.

The headline change in Ubuntu 21.10 is the inclusion of GNOME 40 as the default desktop environment.

GNOME 40 introduces a horizontal workspace switcher and a horizontal application launcher, as well as new touchpad gestures (in Wayland only) for entering and exiting them. Ubuntu 21.10 still ships with the Ubuntu Dock present, though this now includes a divider between running and pinned apps and includes a trash icon applet (the desktop trash icon has been removed).

Accompanying the rejigged desktop are a set of smaller refinements to the wider GNOME desktop experience. This includes various settings tweaks, such as the wi-fi settings panel showing previously connected networks at the top of the connections list regardless of signal strength, as well as core-app updates, like Calendar being able to handle .ics files, and Nautilus being able to extract password protected .zip files.

Away from GNOME, users can enjoy the benefits of the Linux 5.13 kernel, experience better bluetooth audio thanks to PulseAudio 15, and take the Thunderbird 91 release (and its new user-account set-up wizard and improved calendar features) for a spin.

A Firefox Snap app is installed by default for all new installs of Ubuntu 21.10. This is mostly feature-compatible with the old repo version (which remains available for this release) but there are known issues like no support for installing GNOME extensions.

These and some other Ubuntu 21.10 features at-a-glance:

Mark Shuttleworth, CEO of Canonical, says of this release:

“As open source becomes the new default, we aim to bring Ubuntu to all the corners of the enterprise and all the places developers want to innovate. From the biggest public clouds to the tiniest devices, from DGX servers to Windows WSL workstations, open source is the springboard for new ideas and Ubuntu makes that springboard safe, secure and consistent.”

We put together a video showing the most notable changes:

Want to get it?

Ubuntu 21.10 is available to download as a 64-bit .iso. Write this image to a USB stick, SD card, or a blank DVD. Alternatively, boot the image in virtual machine software such as a VirtualBox.

As the image is 3.12 GB in size so make sure you’re on a good connection (and not a mobile tether) before you hit the download button.

Don’t forget: if you run Ubuntu 21.04 you can upgrade to Ubuntu 21.10 directly at some point over the next few days. A direct upgrade keeps all of your files, apps, and app settings in tact so you don’t have to start over from scratch. 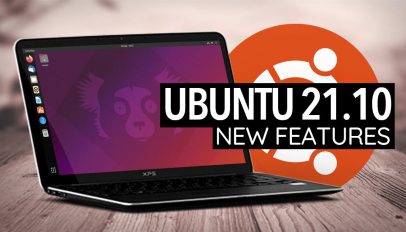