GNOME developers are working a “borderless” version of the Adwaita GTK theme for potential inclusion in GNOME 41, due later this year.

The changes to Adwaita sound relatively minor in isolation — no borders on buttons, no background colour on header bars — but together they outfit GTK apps with a much brighter, lighter look than the current version do.

In design documents to demo the overall form of the new look GNOME’s Tobias Bernard lists the following key changes as being required:

Other plans for ‘Adwaita borderless’ (though not yet present in the code I tested) include making button text bold (like Firefox does) to give action items some visual weight. The theme continues to use colour accents in some places (for instance, blue radio buttons, blue check boxes, red coloured destructive actions, etc).

You can get a good feel of many of these changes in situ by looking at the hero image at the beginning of this post, while the thumbnail to this post (from a bug report by Adrian Vovk) shows many of the accents and buttons in better detail.

All of the actual code implementing Adwaita borderless is derived from mockups created by Tobias Bernard, one of which you can see here:

And this is how things look at present:

As always, development is just that; nothing is final, finished, forgone or anything else. Things can, do, and will change between the time I write this (July 2, 2021) and the time it possible ships in September. There are going to issues and inconsistencies until things are ready for mainstream consumption and merged into main.

For instance, the decision to remove header bar background colours has already led to concerns being raised by other GNOME developers. Solutions and revised approaches are therefore expected.

Still, based on what we can see so far what are your thoughts on Adwaita borderless? 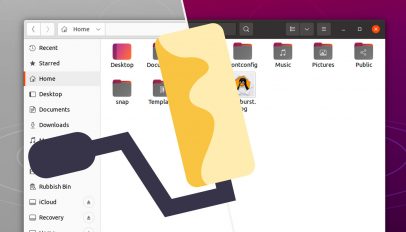