Good news for open source creatives as Inkscape 1.1 has been released!

This update to the open-source vector graphics editor comes with a number of new features and workflow enhancements, ranging from a new handy new welcome screen to new formats to export finished work to.

Chances are you’re already familiar with Inkscape, or have at least heard of it before. Rather like LibreOffice, Firefox, and Blender, Inkscape is regularly cited as an example of how powerful and capable open source software can be.

But in case you’re new to it: Inkscape is a vector graphics editor used for editing vectors (resolution-independent shapes that scale perfectly). GIMP, Photoshop, et al are raster graphics editors which works with pixels at a fixed resolution.

Well, the first time you open Inkscape 1.1 you are greeted by a new welcome screen. This is more than a branded splash though as it lets you quickly customise the Inkscape experience to suit what you need to work on. You can quickly set canvas colours, keyboard shortcuts, appearance, colour modes, document size, and more.

I only use Inkscape infrequently (how I wish I were better at art) but changing the canvas colour is one of the first things I always do as I primarily work with transparent .svg logos that are white (and white on white vanishes). The new welcome dialog lets me set that up right from the start, saving me from needing to mouse through menus.

Talking of which, Inkscape 1.1 includes a new command palette and this thing is awesome.

An app as powerful and capable as Inkscape comes with a tonne of settings, options, effects, and filters. Knowing where some of those are can be a chore. So this release makes it much easier to find (and even apply) settings.

You just hit the ? key, then enter some text, e.g., “rotate” or “flip”, and matching results in menus and dialogs and tools are fed back:

Inkscape devs also say exporting work to .png files is quicker (it now takes one click instead of two); and that the app is able to export to more formats than before, now including .jpg, .webp and .tiff.

Other changes in Inkscape 1.1:

Plus lots more. Take a look at the Inkscape 1.1 release notes for more detail on these and other changes, or sit back and enjoy the official release video:

How to Install Inkscape 1.1 on Ubuntu

You can install an older version of Inkscape on Ubuntu using the Ubuntu Software application. Just search for ‘Inkscape’, hit the install button, and you’re done.

The Inkscape 1.1 packages in the following PPA are temporarily failing to build (and thus can’t be installed). This will be fixed soon, but if you can see this message it hasn’t yet. In the meantime you can download and run the AppImage, or install the inkscape-trunk package from the Inkscape PPA.

First, add the official Inkscape stable PPA to your list of Software Sources:

Then install Inkscape 1.1 (or upgrade an existing build) by running:

If you’re not a fan of PPAs then you can download a distro-agnostic .appimage of this release direct from the Inkscape website (which is where you’ll also find installers for Windows and macOS systems, if you need them).

Inkscape 1.1 is also available to install as a Snap app from the Canonical Snap Store:

Inkscape on the Snap Store

And it’s available from Flathub, as a Flatpak app: 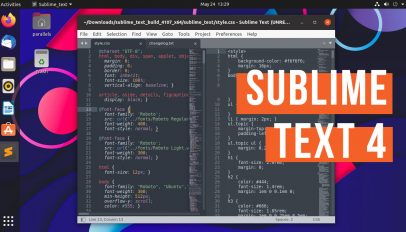 Sublime Text 4 Released with Huge Set of Improvements
Read Next