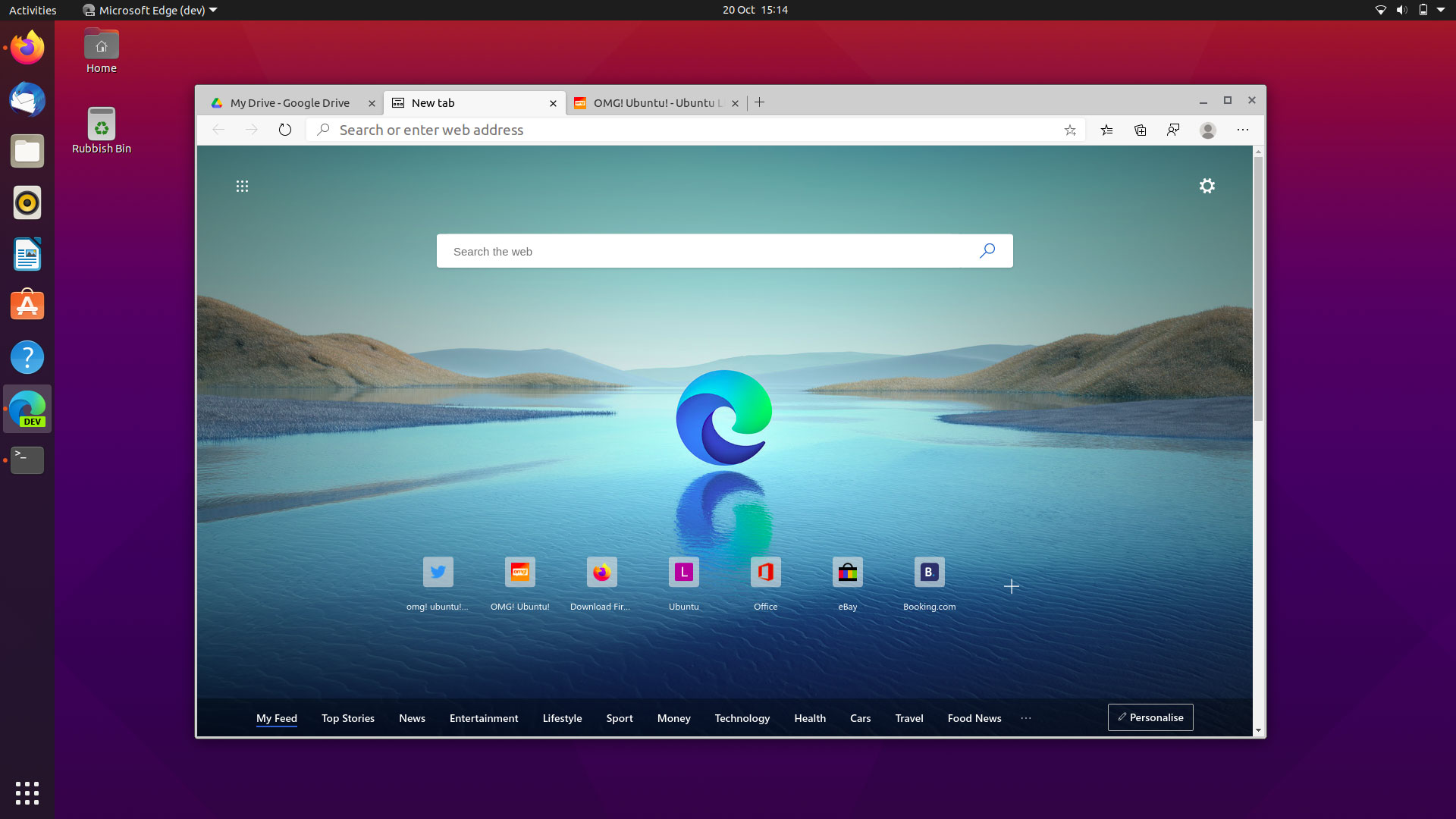 When Microsoft announced plans to rebase its Edge browser on Chromium the chance of a dedicated Linux build went from pipe-dream to inevitability.

Chromium’s cross-platform codebase makes it the ideal foundation on which to build out a modern web browser. Three years since rumours first began swirling, Microsoft Edge for Linux is not only confirmed but it’s almost ready for testing.

Being the impatient sort we installed the Microsoft Edge Developer build on Ubuntu 20.10. This post will stop short of being a “review” per se (you’ll hear throughout this post: this is not a stable build) but I’ve included lots of screenshots and some general thoughts about how well the browser integrates with the default Ubuntu desktop.

Did I ever think I’d be writing a post about Microsoft’s flagship web browser being available for Linux? Heck no! And yet, here we are!

Many teeth have been gnashed over the point and purpose of a Microsoft-made web browser on a Linux platform. Some see Edge’s arrival as the latest bouquet in Microsoft’s blooming relationship with Linux and all things open source, but others? Well, they smell suspicion…

For their part Microsoft says its “motive” in bringing Edge to Linux is simply about making its technologies and services available to more users. Yes, even if they don’t run its Windows software (which is, after all, just one product/service in its portfolio).

Microsoft’s heavy presence in business, enterprise, and (increasingly) developer communities also plays a part. People who have to use Microsoft services at work get the chance to use the tech they’re familiar with and/or sync’d up with at home, on their Linux laptop, if they want.

But is there anything to interest casual Linux users too?

Edge is more than a Chrome clone; Microsoft had imbued Edge with custom touches and novel feature integrations. While many of these may sound superfluous to power-users they do, on other systems, round out the browser’s feature set.

Or to put it another way: Edge is a mass-market, all-user browser. It’s not aimed exclusively at any one audience, be that web developers, power users, or computer noobs.

So some of its “Added Value” may sound minor, trivial, or frivolous. Take Collections, for instance. This is essential just a souped-up bookmarking tool that lets you save content — not just web links — directly to the browser for future use.

You can create multiple collections in Edge, rename them, add notes to them, and export all of that data to other services (or copy of the links to the system clipboard).

On to integration. The Edge app launcher in the Ubuntu Dock does have a small right-click quicklist. This offers fast access to options to open a new window, a new incognito window, or quit the browser.

While the pale-grey bar Edge wears is not terribly distracting (unlike Vivaldi’s gaudy red window frame) some kind of GTK inheriting/colour detection (even if only an option) would be welcomed, I’m sure.

And Microsoft Account sync does not work in this build — but if you read this site regularly that will not be a surprise.

The good news is that many of Edge’s other features — yes, snarkypants, it does have some! — are present.

You can install Chrome extensions on Edge easily. The first time you visit the Chrome Web Store using the browser it asks if you want to enable Chrome extension installs.

While I can’t vouch for the entirety of Chrome’s extension catalogue, all of the extensions I tried (yes, including the omg! ubuntu! one) worked as expected, as you can see above!

For an early version of Edge for Linux the browser feels fairly robust. It didn’t crash once during my test. Everything I asked of it, it did. From HD YouTube playback, to translating a Portuguese web page, to letting me play web games.

The app is fast to open and responsive in use. If Microsoft can maintain the friction-free feel it could win some new fans. Firefox isn’t slow, but a Chromium-based backend just feels so much faster in use (to me, anyhow).

Want to try things out for yourself?

It’s not yet clear when Edge for Linux will go stable, but Microsoft has now formally announced the developer preview (which they hadn’t when this post first went live). You can find Linux builds on this Microsoft repo page.

If you jump on Edge for some early-bird testing just keep in mind that it is development software. It’s not finished. It’s not stable. Heck, it’s not even fully functional. Ergo, don’t get irate about any issues you encounter!

Home » News » We Go Hands on With Microsoft Edge for Linux

Archisman Panigrahi You can ask this question in Ask Ubuntu for detailed instructions.
Linux Support for Apple Silicon is Getting Underway

Archisman Panigrahi Unity is still there. https://ubuntuunity.org/
Linux Support for Apple Silicon is Getting Underway

Rosyidi Alwan I believe this would happen, soon or later. Linux is…
Linux Support for Apple Silicon is Getting Underway

JustPerfection GMB wasn't dead. Squentin is working on it and he…
GMusicBrowser Back From the Dead with New GTK3 Port