I’m pretty excited for the upcoming release of the PineTab as it’ll arguably be the first real Linux tablet there’s ever been!

But for a Linux tablet to actually be a Linux tablet it needs to run a Linux-powered tablet OS. As seen with the PinePhone, the open source community is stepping up to provide one.

When the video at the top of this post landed in my inbox I clicked play without hesitation, then rushed to WordPress to prep this post about it!

Now, Ubports took over the development of Ubuntu Touch after Canonical canned it. The team, while small, have invested their resources wisely to keep things ticking over and running on a proper Linux kernel.

It’s encouraging to see that that the OS runs well on the PineTab— mercifully nothing like the disastrous tablet demo of 2016 — and that the relevant hardware support required for the dockable keyboard is present (though no demo of rotation support).

Many of the Unity 8-era concepts conceived by Canonical’s design team, like love handles for resizing app windows, and a “portrait” side stage (apologies if that it the iOS term) are present and working which is great to see.

Linux on a tablet is a really interesting area. Android tablets don’t quite hit the mark in the same way that iPads do and a lot of that is down to the quality of software.

Having at-a-touch access to powerful open source apps like GIMP, LibreOffice on a versatile form factor… Yeah, I dig it (though i’m not sure if Ubuntu Touch is still limited to running weird down-stream versions of regular repo apps as a proper web browser like Firefox or Chromium would be sweet).

GNOME designers are also busy exploring what a GNOME tablet UI could look like. Their approach, while a work in progress, is incredibly intuitive and well thought out and, building out from concepts introduced with phosh for a more consistent experience.

Still, with major foundational hurdles cleared I’m hoping the Ubports team can now start to focus on quality-of-life improvements. The kind of fit and finesse that elevates the end user experience above proof of concept. Patch over the paper cuts. Stamp out the stutters. Amp up the availability of apps. 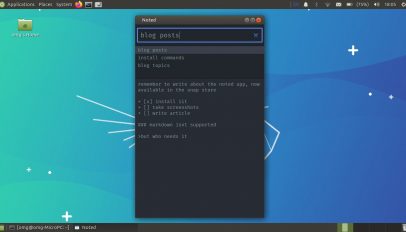 A Keyboard-driven Note Taking App for Linux Desktops
Read Next